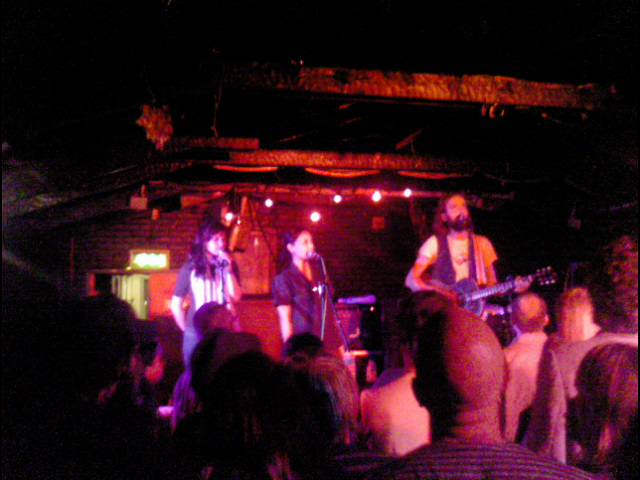 The evening begins with severe confusion about my name being on the guest list. Granted, this confusion was mainly my own and, for a moment, I felt like I was in an episode of shit eighties television show ‘Nightmare’. Luckily, after several minutes of ‘taking one step to my left’ and ‘offering the Jester my satchel’, the lovely people at Pineapple Folk and Manchesterconfidential.com showed that not everyone in Manchester is a dick and let me into the already packed out venue.

Emmy The Great is the alter ego of Emma Lee Moss, who sometimes plays alone and sometimes plays with a band. Tonight she is accompanied by her mysterious mandolin man and, together, they make a wonderful racket. Combining melodies that twist and pluck at the hairs on the back of your neck with deceptively sharp lyrics, the songs seem to be underscored with beating of a broken heart. Also, the mandolin on ‘There’s No Such Thing’ is shit hot.

Herman Dune begin with ‘Baby Baby Be My Baby’ which sounds instantly like a tropical Smog or maybe even the Silver Jews. With the Babyskin girls providing backing vocals tonight, their pure tones add a new level of depth and warmth to the sound. The lyrics sometimes leave you flat footed for a second; they have a sharpness that would be hilariously funny if only they didn’t take a second or two to absorb into the brain. With the upbeat stomp of ‘My Home Is Nowhere Without You’, shoulders begin to loosen and defrost, aided by the chainsaw-like intermissions of noise. Andre moves like a Callaghan or Malkmus; at times raw, like a grazed knee, his lyrics are vivid and almost bounce right out of the ear. One of the highlights of the night has to be ‘When The Sun Rose Up This Morning’ which ascends or descends, depending on your point of view, into a brilliant bongo freak-out. They finish with the jauntily hopeful ‘I’d Rather Walk Than Run’ which, like Johnny Cash wearing a bowl of fruit on his head, sounds like some kind of rawhide-rumba or stickle brick hoedown.

For more craziness of this ilk, check out these links: