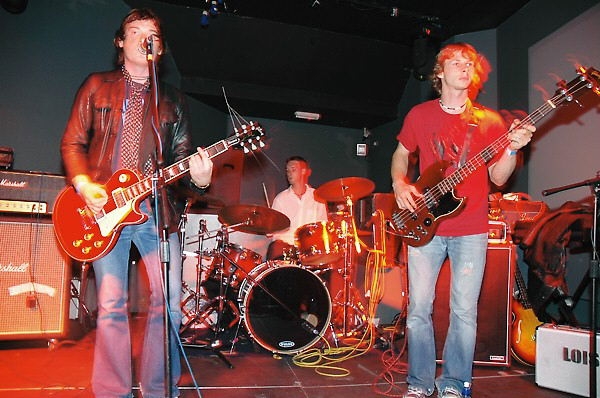 Well it must be a dream come true for Nottingham’s own Lois, who tonight have drawn a capacity crowd at Nottingham’s Rescue Rooms. OK, we all know tonight’s main act Kula Shaker brought them, but Lois won’t give a single and solitary hoot about that now will they?

They kick off to a receptive crowd that warmly acknowledge the opening track that if I’m honest, and I am, is nothing special but by the end of second song, Lois are having it! They’ve obviously tuned their initially nervous systems and relaxed into the role, delivering some sweet guitar and vocals that although offer no epic emphasis or subtle emotion is good stuff nonetheless.

The crowd are happy as the momentum builds. Some cheeky but meaningless banter with the crowd about how crappy it is outside compared to the heat on stage. A fair attempt for a small fish in a whale’s belly! The crowd is made up tonight of young hipsters and freaky old timers and it’s heart-warming to see them all in the melting pot together to witness this opening Bluetones/Space sounding act.

Throwing some very Kula Shaker-ish echoing guitar in the mix gets the crowd enthused once more, bringing grimaces and grins to those just coming in from the cold with disbelief in their hearts at the fact that Kula Shaker are already on stage, which as you and I know, isn’t true. Tee hee.

Notably, the bass guitar is strongest throughout and the drums don’t really draw the ear ‘til later. An announcement from the band informing all present of the free badges they’re shelling out tonight, shockingly doesn’t stir a wave of action. I’m pleasantly surprised at the end to see they’re all gone though, as are the CDs.

Their penultimate track is a little too predictable but is quickly overshadowed by tonight’s closer. Those who aren’t stupefied with anticipation of the ever building anticipation of Kula Shaker are righteously enjoying this massive Lois given groove. Did I mention the drums yet? I may have, but to emphasise my point, they really come into their own on this track, smashing and simmering away appropriately with this great track. Well done Lois, I wish you all the best!

Lois are recording an LP now so watch out!
Find out more at [link].