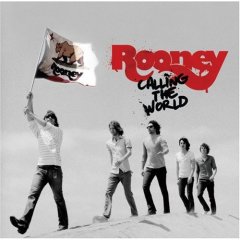 Okay, to start a personal bugbear – any song containing effects sounding anything vaguely like a mobile phone should be banned. Can you imagine the road carnage every time ‘Calling the World’ comes on the radio?

Right, now I’ve done my ‘Angry from Dartmoor’ bit – onto the music bit.

I should state in the interests of fairness that I am a hardcore Manchester City fan, so any band vaguely linked to Wayne Rooney should set my teeth on edge.

The truth is, they don’t and I am a very fair individual (if you catch me between 12pm and 3pm on alternate Thursdays!)

No prizes for guessing which is the real chart hit on this album. When Did Your Heart Go Missing , while catchy, has a number of things against it from the outset. The biggest problem with it is that it has the same beat as Footloose, one of the single biggest crimes committed against music of any generation, the Birdie Song notwithstanding.

Still it’s very catchy, cleverly written, and despite being predictable is a hell of a good song. Ask my one year old daughter – she turns into a frenzied dance monster when this comes on.

So for that reason alone I have to give this one a thumbs up.

Unfortunately for the band this one’s a bit like the late bus on a Friday night when your curry’s burning a hole through it’s paper thin plastic bag, and you’re seeing three bus stops instead of one – it‘s basically running way too late.

It’s a Summer anthem, and while very good, it simply reminds us that we’re being fed into the icy jaws of yet another sodding Winter.

That said though, I like Rooney’s style: I like the throwbacks to Supertramp on tracks like I Should’ve Been After You (bound to strike a chord with stalkers everywhere!) and the overall honest sound.

It’s a nice addition to the line of bands queuing up to get into the UK.

And the album cover’s nicely done too, although the faux 70s beach shots of unkempt curly hair, hairy chests and dune surfing all lead to one conclusion – these guys are The Monkees reincarnated.

That’s not a bad comparison. Let’s face it The Monkees wrote hideously catchy songs, made amusing films and pocketed lorry loads of dosh.