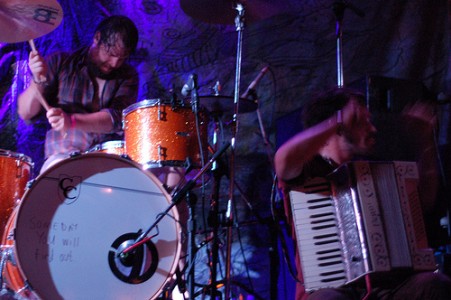 Ever feel like everyone but you is in on a private joke? You stand alone; quivering in your own stupidity, wondering why your elastic skin won’t peel over your face, to hide you from the crowd; desperately wishing you were invisible. The knowing faces surrounding you, speaking in gobbledygook, appear to hold keys to doors behind which the answers, you seek, lie. You listen and through every flicker of a drum beat, every self-effacing syllable, every gentle strum of the acoustic guitar, you feel unknowing. Everyone around you is having a grand time. What did you miss? Sometimes you need to admit defeat and realise that, like that spotty kid from Almost Famous, you just aren’t cool; you’re not in on the joke, you’re not part of this movement; you are unprepared, unaware that the bandwagon was making a stop at the Borderline this evening.

Mewithoutyou are an American band, from Pennsylvania if you want a firm geographical location. Losing an instrument or two from their mountainous trek across the ocean (in a plane no less) they are feeling disorientated and lacking in musical accoutrements. They leap on stage (well okay lead vocalist Aaron Weiss, leaps on stage); they ask the crowd for a theme for the evening’s festivities, someone shouts ‘peace’; we think this may be contrived. Weiss plays a cutesy folksy interlude about a spider on a leaf (a reoccurring titbit on the newly released ‘Brother, Sister’ album); flowers are laced around the mic stands; Weiss is wearing far too many layers of clothing for this temperate habitat, looking like he’s off to outer Mongolia; Weiss calls his compatriots ‘Brother’ too many times; muttering something about sun dried tomato and olive bread backstage and playing Bob Dylan songs (around a campfire probably); will someone please let us in on the joke?

When you do a bit of background reading, you realise that you can be enlightened. This is the launch night for their album (released the same day), the songs are played in the order on the album, a continuous musical backing ensues between Weiss’s conversation and his conversational song writing content (which can be difficult to distinguish). ‘Nice and Blue (Pt Two)’ is hidden half way through the set; Weiss’s lyrical monologues seem louder, more angry, heightened in person, and not so overcast by the melodic backing vocals. The spider interlude reoccurs, mirroring the album adequately- the leaf changing colour until it eventually dies. Their best track (well in our humble opinion) ‘A Sweater Poorly Knit’ rears its head at the end of the set; Weiss’s vocals are unmistakably ‘Brand New’ inspired – unsurprising then that this band are supporting them on their fall tour. Their sound subsides between heavy and melodic, choosing to overthrow each at different points in the set.

Mewithoutyou are a strange bunch; if only because they care about things that others simply do not even think about; asking fans to help them find waste vegetable oil to fuel their tour van (they collect wasted fried oil from local restaurants when they tour in Pennsylvania); trying to organise teeny gigs, where people cook and share sorrows and talk about the crazy world in which we all live; it is like watching a rare species of animal elope from (the already mentioned) outer Mongolia, and that is supposedly -the joke we’re not in on.

People have flocked to the Borderline this evening to hear a band that are ethical but puzzling, unrestrained of interest just from their music. This is not a bandwagon stop; it’s a group of people from London- the busiest, craziest, over-consumable hub on our fair shores- coming to support a band that represents a life they will probably never have. And that in itself is reason enough to be inquisitive. Their music can be loud; it can be subdued; Weiss can say interesting or mundane things in those spoken lyrics. Regardless of that, sometimes alienation is the best way to lure enquiring minds, which appears to be the case this evening.