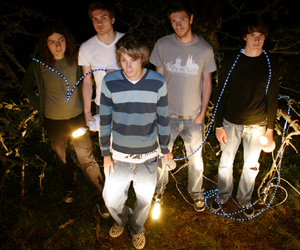 I don’t know if it’s some kinda cloud creating effect made (what with their name and all) by Kyte in the Bodega tonight, but the smoke machine that’s a puffing sure is adding to the ethereal feel of the scene. It’s also doing a great job of recreating long lost choking times when cigarette smoke obscured all. Scheduled for a 1 hour set in support of I Like Trains (ILT), Kyte, of whom I’ve never had the aural pleasure, take to the stage to a warm reception from a 100 strong crowd who are responsive enough to stir suspicions of a fan base presence.

Kyte settle on stage and remain partially obscured by the proud display of amp wealth. Their vocalist/keys jockey stands centrally, hunched as he enthusiastically wails into his mic’, which I’m sure he’ll soon come to realise is uncomfortably low. The sticks man purposefully bangs away at the skins with gracious poise, perfecting his performance impeccably. 3 guitarists combine their sounds seamlessly, with no hint of a power struggle or inclination for a self indulgent solo. 1 stands spot lit and oozes charisma, 1 stands head down and distant whilst the third little piggy went wee wee wee… (sorry, lost my train of thought)whilst the third stands in the amp given shade along with his xylophone (at least that’s what it looks like from where I’m stood) which he also puts to impressive use between guitar and extra curricular drum kit abuse.

That’s the band, then let’s hear the music; both absorbing and vague in equal measure. I’m sure they must get sick and tired of Sigur Ros comparisons and rightly so because these guys have got a greater sense of urgency driving their dynamic sound. The drums particularly summon my dearly beloved and sorely missed Secret Machines whilst the guitars summon the likes of ‘Explosions in the Sky’ and any given high calibre band of such ilk.

Sublimely escalating from nothingness and fading into the atmosphere, their attention demanding songs are quietly hypnotic, packing enough power to leave unreserved restlessness in the wake of each track. The audience are hungry for more throughout the entire gig, as their individual appetites are teased and wet. The vibe in here tonight is truly electric and I consciously count my lucky stars for making it here tonight, already by the close of the second song.

Track three and that pesky mic’ stand is repositioned, surely much to the delight of a certain vocalist’s vertebrae. Pretty fairy lights catch my eye around the bass drum, enhancing the sharpness of my beer derived twinkly glint. After short inter band banter and a “Thank you, thanks a lot” which frequents the trail of gasp-filled breathers between tracks, we’re off again with the sounds of drumsticks being rapped together with sweet, concise precision. It’s simply joyous to behold as the band join in, wind up and knock out what might be my favourite track so far, a track possibly called ‘Lavender’, I’m unsure as the barmaids smile and request for cash distracted me with the cruellest of timing.

Before anyone can ready themselves for the fearful close of Kytes set, the last song is announced amidst plucky guitar and sparse percussion, each unfolds and escalates beautifully, leading the way for some emotive vocals that complete the gorgeous Kyte effect. Ever onward and upward we go with both the drummer and vocalist crashing and clattering away at the cymbals, all the guitars in overdrive, surely just like everyone’s yearning, freshly captured hearts.

Mesmeric to say the least, Kytes alluring mystical intensity is perfectly illustrated by the rush of bar-ward folk who hesitantly shake themselves free from the sonic glue of a spellbinding set that perhaps unbeknown to most, is now interwoven with our souls. The beer and souvenir based plight of a once motionless mob, occurs in harsh contrast to the sea of tranquillity that preceded the movement. Only now, released and awake to comprehend the magic, can we stand smugly and satisfied.

I approached one such gleeful looking fellow to ask his opinion. Andrew Osborne, clearly a man of impeccable taste had this to say…

“I saw Kyte at last year’s Truck Fest and they were even better, though the Perry cider and brilliant atmosphere probably helped. Kyte were in no way disappointing tonight and they held my attention most of the time, unlike my partner Deb who played Sudoku on her phone whilst they were on.

She prefers ILT who we saw last year in Norwich where we live. They were great, their heavy drums, high plaintive guitar, mournful horn and the lead singers deep clear voice and sombre lyrics is were just beautiful and cheered me right up, I was a bit miserable that night. Before I was engrossed and transported by their sound and at the end we bought a bunch of stuff on various formats and a real nice t-shirt.

I Like Trains produce songs based upon, usually tragic or sad historic events which sound a hundred times better than you can imagine without hearing them. Anyway, the Bodega have short changed by £5, I’m off to give ‘em grief!”

So, there you have it folks, don’t leave it too long before you check out Kyte or ILT (my ILT live review is beyond this [link]), which you can do below with a little help from little ol’ me.