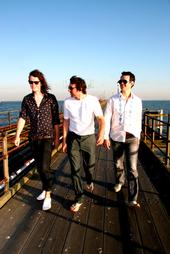 New single ‘Black Moon’ by A.Human is alright. If you like that sort of thing.

There’s really nothing wrong with this except the pretension that accompanies it. Claiming to be ‘whacky’ and ‘oddball’, this band is nothing of the sort.

It is, however, a pretty catchy, pleasant listen. A. Human sound like the love child of Goldfrapp and the Killers, but with the Mighty Boosh’s Vince Noir as the front man. Featuring distorted guitar, picked bass and electro-synth keyboards, ‘Black Moon’ is everything that an electro-indie rock fan could wish for.

B-side ‘Trees Sway’ is a more interesting affair; with an almost sleazy bass line it kind of has a Fun Lovin’ Criminals gangster rock vibe without the associated humour. It’s quite nice.

‘Black Moon’ is alright. It’s nothing new, it’s not the next big thing, but it’s alright.