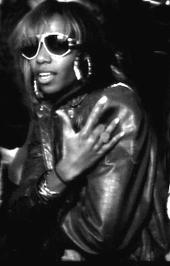 Ah, the next big thing – how many times have you heard those immortal words echoing any muso journalist who is struggling for ratings and needs to justify his or her existence? Why do they insist in putting themselves and the artist under such an amount of pressure that once they fall down they are as quick to knock them as when they build them up some 6 months earlier?

Anyway Santogold are the next electro pop band to be thrust into this particular spotlight – they doff their cap to a certain genre that already has New Young Pony Club and CSS in it. I am sure I don’t need to go any further with comparisons.
‘LES Artistes’ limps into your ears with all the thrust and vigour of an amoeba. It lacks a certain passion and hook to really press your buttons. The biog comes with a view that this is 21st century Debbie Harry – its a big comparison and the song lacks the passion, sex and soaring drive that Blondie had and couldn’t be further from the truth.

Next big thing – Didn’t they say that about Toploader once? I’ll be seeing Santogold in the bargain bin at woollies in 6 months.