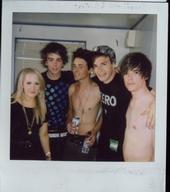 Is it just me or does it look like loads more fun to be a teenager now than ten years ago? I don’t ever remember there being an underage issue when I was 12 or 13, maybe I looked older but I clearly didn’t look 18, and no one ever refused me entry to a gig. Not once did a hairy bouncer discriminate in such a way that it stopped me seeing live music. Moving swiftly into the naughties though, and there was not only an issue with kids being allowed to support their favourite bands but the kids in turn, stuck both fingers up at the very idea and went on to have all ages shows, underage festivals and like tonight, 14+ gigs. Aside from the fact that the movement is in fact ace for today’s teens, it also attracts them all at once in the same room and makes me feel 105.

Perhaps fun is not the best term to describe it but there is certainly a community of youths drawn together whether through choice or not. There are a few older heads here tonight but part of me thinks they might well be chaperones. A worrying display is the amount of people crying. Actually balling, like tots who are sinking in a massive multicoloured ball pen, covered in snot and in need of artificially flavoured ice cream. As my friend and I stand at the bar and note we are pretty much the only people here with beer, we wonder how exactly so many teens could have been dumped on the same night or become so upset with the ladder in their neon tights, that they would feel the need to cry hysterically in public.

Then at second glance (including one freakishly tall girl who most definitely had a foot on her dad when she was ten), maybe none of the above happened; maybe we just walked in on one very loud and brightly coloured puberty malfunction. With this setting, the atmosphere for the gig is somewhat spoilt.

It is impressive mind that Hadouken! have managed to almost fill the Academy with said 14 year olds. What’s less impressive is their set. Liquid lives is a tune, there’s no denying it’s single-ability and That Boy, That Girl is a sure tool to overexcite the crowd but the rest of the set seems to happily merge into one lyrical joke, there is little to do but try to figure out the message here. Who is this music aimed at? 14 year olds apparently, as the start of Get Smashed Gate Crash encourages deafening screams, I’m unable to get in on the action “welcome to our world/we are the wasted youth/and we are the future too.”

For a uni band, which made it to the top of their crossover game, they must be applauded for mixing as many genres as they do and making it commercially accessible. With elements of grime, rock, garage and rap fitting nicely under a layer of synth core , Hadouken! are capable of keeping a variety of music tastes chomping at the bit, but tonight, I’m not one of them. New single Declaration of War doesn’t really work for more than five seconds; it sounds like a German boy band choking on glow sticks whilst invading a computer game convention. And no one wants to see Bryll cream get messed up after hours of styling. Back to the bar then…