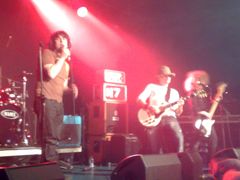 Lanarkshire band, Shoes On Fire wowed crowds at Strathclyde Union with a blinding set.
Supporting indie poppers, The Holloways, the four-piece rocked through an eclectic collection of sixties inspired songs.

Hailed by The Holloways as “The Scottish Doors”, frontman Jamie swaggers from one side of the stage to the other, belting out first song “Cross Fire”. Crunked up guitars and thrashing drums infect the crowd with the sheer catchy beat – it’s apparent that these guys are an instant hit with the relatively young crowd at the union.

Halfway through their set, Jamie introduces a song about “burds”, adequately named “The Pigeon Song” – a humorous ode to the feathered inhabitants of George Square. Fast and furious, “The Pigeon Song” is a frenzy of snappy vocals, punchy riffs and a thumping drum beat.

“Liquor Back Truck” a soft rock song complemented with a sassy blues drawl induces a more blues/grunge feel to the gig, with other songs “Back Seat Driving” and “27 Blue Bus”.

After a chant of “One more tune” from the excited crowd, the band are back onstage for an encore, ending their night with the epic “27 Blue Bus” name dropping members of the infamous ’27 Club’ including Kurt Cobain and Janis Joplin.

Confident and putting in a more than energetic performance, it was a surprise to most, that this was only Shoes on Fire’s second ever gig. These guys are an immense talent, quite unique from bands around at the moment – a definite one to watch