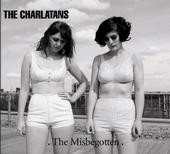 The Charlatans – The Misbegotten

The third single release from the band’s latest album “You Cross My Path” which was given away free in digital form earlier this year before its upcoming general release is “The Misbegotten”. Unlike the indie style most associate with The Charlatans this track is influenced more by electronica with lyrics reminiscent of a dance track.

Have they gone mad you may ask? Well no, those lucky enough to have been enjoying their music since the start will recognise with nostalgia that they are drawing on their early career as part of the “Madchester” scene which blended dance and indie before Britpop was ever conceived of.

By making this return to their roots they will tempt back their old legions of fans which remember their stadium filling days. “The Misbegotten” has clean guitar riffs which give way to the strong bass lines and the vocals that are both melodic and withdrawn at the same time. It is a style that is fresh in the melee that is UK indie music in 2008 and could well win them new fans and start a new era in their career which is rapidly approaching it’s third decade.