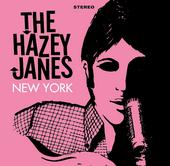 Just saying their name makes you think that they are an all girl group, and with just one listen of their new song ‘New York’ you think they are American. WRONG!

The Hazey Janes are a Scottish 4 piece consisting of three guys and a girl, sadly minus the pizza place! Yes they hail from Great Britain but have managed to successfully pull off the Americana sound, which makes them so universal and instantly likeable.

Their vintage video is a must-see and perfectly compliments this light and appealing tune. Think Magic Numbers and you have just some of the talent that makes up The Hazey Janes.