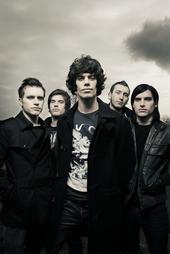 Probably one of the most hyped British metal bands of the moment, Reading based outfit Exit Ten have had several critics excited ahead of their debut full length release, “Remember The Day“. Latest single “Technically Alive” adds further weight to the growing suggestion that the band have the sound, scope and ambition to break the shackles of Britain’s underground metal scene and succeed where so many before them have failed.

“Technically Alive” has a sound typical of the genre, racing double bass drums and furious guitar riffs that are immediately met with swooning high pitch vocals. The track is without the incessant and unnecessary throaty screams or roars synonymous with their counterparts, and the emphasis is placed instead on soaring melody. Although at times you feel that “Technically Alive” lacks any edge, it still doesn’t distract from the fact that Exit Ten do have a unique sound. Whether the band have it in them to take on America’s mighty “metalcore” market, remains to be seen as there is still perhaps room for improvement. But if “Technically Alive” is anything to go by, Exit Ten will at least be gracing the covers of Kerrang very soon.