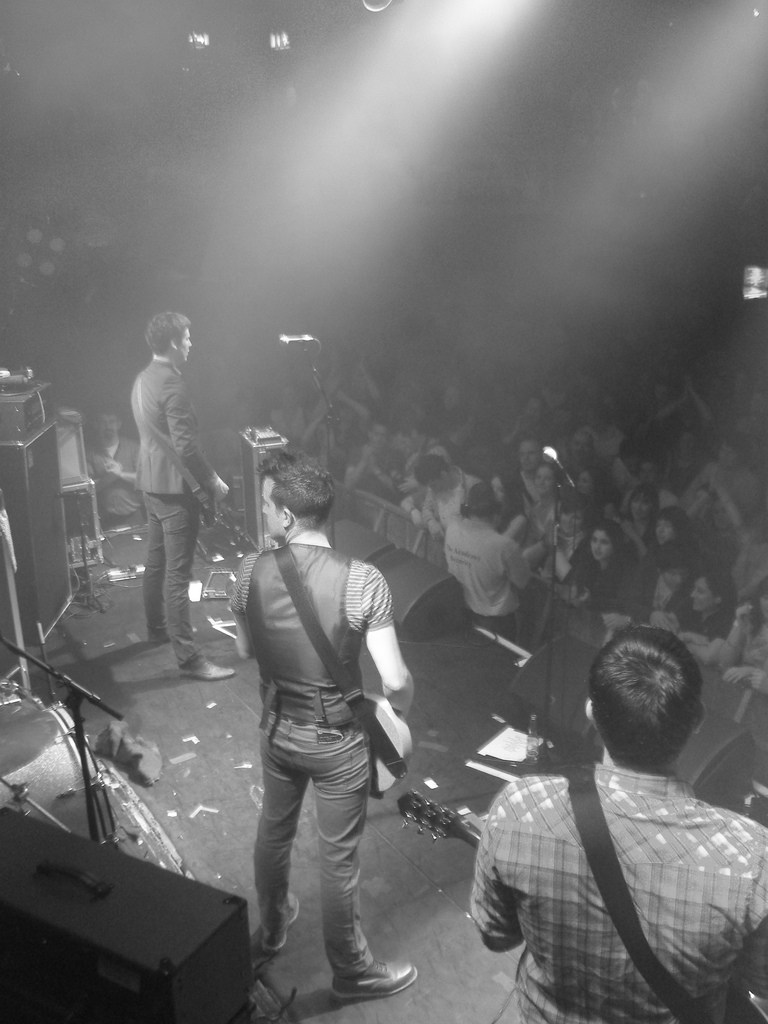 “We don’t want to ban crowdsurfing. Carry on as long as you are wearing slippers. Are you wearing slippers? Don’t lie to me now! Let’s change that to those big pink fluffy slippers in the shape of pigs. You still got them? We met this girl in the front row in Nandos earlier and she just got kicked in the face. We don’t want to stop the fun but don’t kick our friends!”

The three pronged front line attack of Sunderland’s finest rock band just had the kids too excited to stop. Over and over came the same three boys, big grins on their faces and without a fluffy slipper in sight; despite the pleas from the Mackem’s lead guitars and vocals Ross and Barry the kids were an inch away from a good hiding at the hands of the bouncers.

The Futureheads come with big reputation and three full length albums in four years following last week’s release of ‘This Is Not The World’. Those from the self titled debut still have the biggest impact and originality and the fans gave the lads the biggest reception for opener ‘Decent Days and Nights’ and set highlights ‘Man Ray’, ‘Carnival Kids’ and brilliant Kate Bush cover ‘Hounds Of Love’. The new material is strong and will bring more commercial success with catchy hooks, singalongs and Radio 1 friendly singles but without the same quirkiness and individuality that made the debut stand out. Tonight they showed off ‘Radio Heart’, ‘This Is Not The World’ and crowd pleasing single ‘The Beginning Of The Twist’ for which backstagers and Operator Please poured out en masse to twist along.

Operator Please are a band you want to like but one who can’t hold your attention. Despite all their efforts the Australian’s songs are just too similar and lacked real lasting impact. Lead singer Amandah looks and sounds alot like Beth Ditto but the tunes just don’t match up to the Gossip girls’. They build and build with vocals, violin, synths and guitars all crashing yet it never explodes to great new places.

With some new songwriting imput they could be fascinating. The Futureheads followed on and Operator Please danced in the shadow of a band who can already claim to be that.