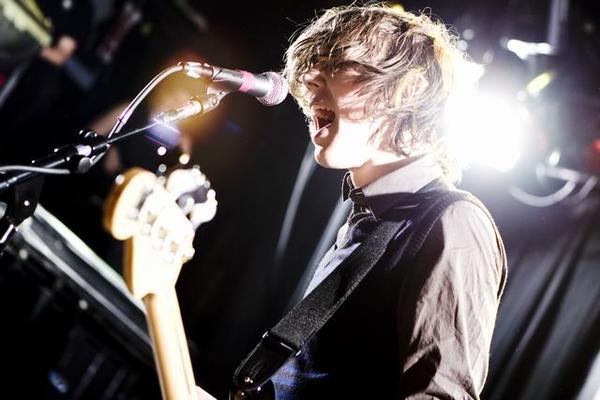 The Barfly was literally dripping with teen spirit on Thursday as the intimate upstairs gig burned up. Tokyo Police Club are another band claimed by the UK’s obsessive youth and the queue wound almost into the street hours before they hit the stage.

The Canadians had the front risking death by drowning as the moshpit grew and drew sweat from every pore leading in to their most famous song ‘Nature Of The Experiment’ taken from their 2006 EP ‘A Lesson In Crime’. In a similar vein to modern English feel good Indie, Tokyo Police Club play fast and the lyrics come out like terrace anthems for the kids to belt back at them. Lead vocal Dave Monks sounds alot like John K. Sampson of fellow Canadians the Weakerthans, only speeded up and without much of their reflection. Most of these songs are short, catchy party starters led by pounding drums, joyous soaring guitars and now jerky electro beats from new album ‘Elephant Shell’, best heard on ‘Your English Is Good’. A song to dance like a lunatic to. Latest single ‘Tessallate’ is another standout along with last year’s ‘Box’, both of which prove Tokyo Police Club have been writing mod-punk single classics for three years.

The lyrics and hooks are so good that this band can fill venues with young and older music fans there to see great writers and performers and not just good time sell-outs writing throwaway lyrics. Tokyo Police Club are the energy band to see right now and maybe for a good time to come.