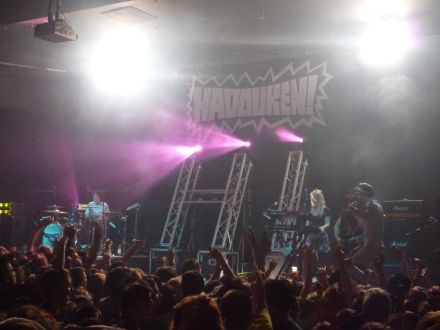 Hadouken! make music that sends energy flying through your body. If you are going in to battle – a boxer, a soldier, a bouncer at Weatherspoons’ pub – their adrenaline rush is unbeatable. As the beats rain down the crowd bounce up together, fists pumping to the epileptic pounding. Despite being sold out the Cambridge Junction is empty ten meters to the back but for a few cowering couples. The youngest of fans are pressed in a tight semi circle surrounding the band. Hadouken! are energising whether you’re fourteen or twenty four; the latter making me one of few not begging the unimpressed bar staff for underage alcohol. “Hadouken! Cambridge!”

Some songs recall the heroic grandeur and buzzing chirp of the Streets (‘Get Smashed Gate Crash’, ‘Mr Misfortune’); both produce music that swells you full of passion. Their work strikes down over UK bands that came later copying like cats, instructing how to produce genuine crossover urban music. Most don’t invite comparison (‘That Boy, That Girl’, ‘Crank It Up’), but hint to roots spawned from UK hip hop, techno and grime of The Prodigy, Wiley, Dizzy Rascal and the Chemical Brothers. Hadouken! have done what most modern bands fail to do and create lasting, original work full of bang-on Gameboy and Mario Brothers’ beeps, bleeps and jerky beats. Seamlessly moving from the old school to a strange place in the distant future the hooks, speedy electro samples and towering synths are broken only by James Smith’s ceaseless MCing. Hadouken! wreaked havoc with minds already close to collective mayhem.

Many critics see the band as another accessory for their fans; as fleeting as the neon, skinny jeans, Nike Air Max and raised cap – throwaway music for an attention deficit generation. That comes from those who haven’t seen Hadouken! live or listened to ‘Music For An Accelerated Culture’ on full volume. Their debut should be viewed as a modern British classic – a definitive comment on current youth culture – in the same class as ‘Original Pirate Material’ and ‘Up The Bracket’.

The London accent and street slang make the band authentic for the fans living the lyrics every day; celebrating together at gigs by night, “Welcome to our world, we are the wasted youth, and we are the future too.” The gimmicks are becoming less important – glow sticks are banned – and the music is proving itself to be infectious, hopefully making the next album an exciting progression.

As Hadouken! crashed to a close we joined the chaotic stragglers scratching through piles of lost sunglasses, clothing, wallets and mobile phones; nobody recovering what they were looking for. As the music ebbed away everybody had found the band they were searching for.