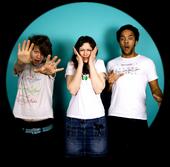 It could be the year that the genre of “quiet LOUD quiet” music really takes off. Los Campesinos! have lead the way releasing singles at a prolific rate over the last year and The Ting Tings have had chart success with a more restrained version. For their part Johnny Foreigner have been quietly playing gigs and gathering an ary of followers before releasing their debut album “Waited Up ‘til It Was Light” this year.

“Eyes Wide Terrified” is taken from that and has also generated their first music video which features cartoon ghosts just like the single artwork. This single also sees them take another step towards the big time, something that most fans and critics are sure is a certainty for this band. “Eyes Wide Terrified” is good example of why; the boy/girl vocals play off each other well and the angular guitars give the music a raw live feeling. It isn’t too indie either, the upbeat music and singalong chorus “Your life is a song, but not this one” give it just enough pop to encourage a wider appeal.

Two new b-sides are included with the single; “I Heard, He Ties Up Cats” and “What Burlesque Won’t Stand”. While these aren’t quite as mainstream as the A-side they are still great tracks that fans with lap up.