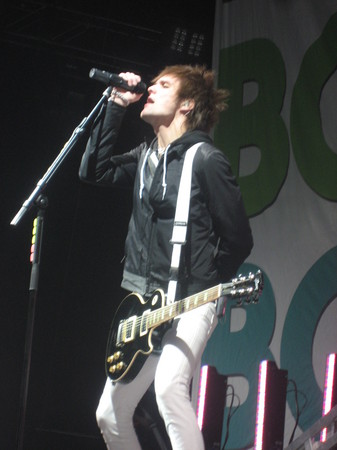 An education in which bands the emo kids and scensters are currently salivating over was on offer at Leeds University, courtesy of the annual Slam Dunk Festival. The single day event sees four stages squeezed into three rooms with over 20 bands whipping up the whippersnappers down the front.

First up were Florida four-piece We The Kings – and what a start. The pop-punkers’ energy was infectious as they bounded around the refectory stage, lead singer Travis Clark’s face beaming with pride as every word of ‘Check Yes Juliet’ and ‘Skyway Avenue’ were religiously chanted back from the crazed crowd. With this being their debut U.K. show, and without a U.K. release of their album, the response was quite stunning. While many present were obviously more than familiar with their repertoire, there were also plentiful nods of appreciation from the hangers at the back – won over by the shear endeavour and vibrancy of their set. With a spot on the teen drama ‘One Tree Hill’ soundtrack with the slow burner ‘This Is Our Town’, We The Kings profile will soon sky rocket on theses shores in the same vein as they are currently experiencing back home.

The fact the next band, Valencia, actually showed up was a relief for many. After previous cancelled ventures to the U.K., the Philadelphians had a lot of making up to do and although front man Shane Henderson was a little horse following over exuberant birthday celebrations the night before, they displayed exactly what their adoring fans had been longing for. ‘3,000 miles’ is a blistering slice of pop-punk goodness, while ‘The Space Between’ got the room really rocking. Ripping through the majority of their storming debut album ‘This Could Be a Possibility’, Valencia transfixed many an onlooker with their uplifting anthems, and with record number two well on the way, hopefully a swift return visit will sooth the pain of the agonising wait their die-hard fans had previously endured.

Sticking to the all American theme, Red Jumpsuit Apparatus were next to prove their worth on the ever revolving stage. Another debut pilgrimage to English soil, lead singer Ronnie Walker looked ready for a right royal riot. Unfortunately their not so unique brand of driving emo-laden pop-punk with a few screams thrown in for ‘scene points’ was pleasant, but not a lot more than that. Their intentions may have been admirable with a few “are you guys having a fucking good time” here and a few ‘ lets see everyone jumping’ there, but all efforts were in vain as soon as they decided that in a showcase of only 30 minutes they would play a cover of Foo Fighters’ ‘My Hero’. To think they could better or even match such a legendary band was laughable, and as many could predict – they fell flat on their arses. The Californian lads signature song ‘Face Down’ tried it’s hardest to repair the damage, but a poor set-list choice led to a disappointing display.

Pencilled in as stage headliners, Cute Is What We Aim For somewhat surprisingly took to the stage early. The reason soon became apparent as lead singer of the emo mob Shaant Hacikyan was nowhere to be seen. Was he still busy straightening his pristine scenester’s fringe?… nope he wasn’t even in the bleeding country thanks to customs not taking a liking to his passport. But bravely the band decided to continue with their bassist taking over singing duties. Thus a unique CIWWAF performance was guaranteed, but what was more surprising it was actually pretty darn impressive. Mixing old favourites ‘Newport Living’ and ‘The Curse of Curves’ in with teasers from new album ‘Rotation’ kept the rabble down the front bouncing. Piercing screams greeted You Me At Six front-man Josh as he kindly joined in on latest single ‘Doctor’. With disaster averted, the present CIWWAF lads could well and truly pat themselves on the back for a sterling show of solidarity.

So the headlining baton was passed to their mates Boys Like Girls. Strikingly similar in sound, many may not have even noticed the swap. But what they lack in originality the Boston boys more than make up for in energy, belief and showmanship. ‘The Great Escape’, ‘Dance Hall Drug’ and ‘Heroheroine’ confirmed they have the songs to swoon many a teenage girl, while a handful of crunching riffs keeps the lads happy. Their set bubbled to an impressive end, validating their somewhat fortuitous promotion to stage headliners.

But the night wasn’t quite finished, with the best certainly saved for last. St Louis post-hardcore favourites Story Of The Year could be found in the bowels of the university shattering their surroundings with such ferocity. Rolling out many of their sublime back-catalogue with set highlights ‘Until The Day I Die’, ‘We Don’t Care Anymore’ and ‘Anthem Of Our Dying Day’, the stalwarts showed their snotty-nosed upstarts just how it’s done. Recently released third album ‘Black Swan’ was ecstatically received from the worshipping hoards before them. Latest single ‘Wake Up’ went down a shit-storm, showing the quintet are still churning out huge chunks of pulsating punk-rock.

Story Of The Year represented a stunning close to a fine day of bands old and new – all on top of their game.