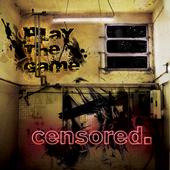 “Play The Game” is the newest single released from Midland’s group censored. Intended to be a summer hit, “Play The Game” has all the right ingredients from an upbeat poppy melody to the “Ba Ba Bah’s” sprinkled throughout for crowd singalongs. However, while it might make a nice piece in a gig or at a festival, recorded it somehow looses some of that the summer magic seeming more lacklustre than sparkling pop.

The second track on the single is “In The Presence Of The Lord”, a heavyweight title for a song that packs in more guitars, more riffs and more rock than it’s partner track. While it shows that censored can do just more than pop, it makes you wonder what else these guys have up their sleeve if they put summer pop and semi-religious rock in the same release? We’ll be looking forward to their next single with interest.