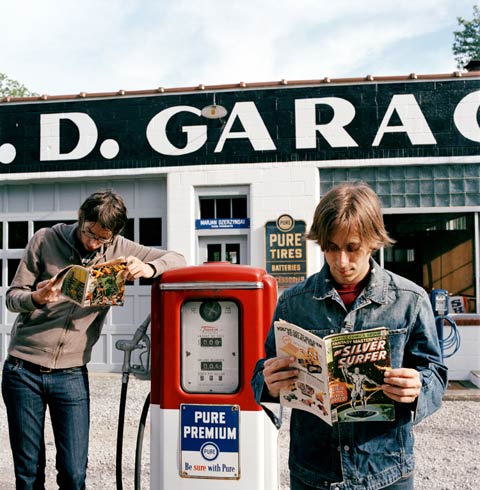 The Black Keys stroll to Glasgow’s ABC for the second time in their careers, and as always the weight of expectation with the fans is high.

Having your music compared to the likes of Hendrix and Led Zeppelin maybe very flattering, but it also puts you under a considerable amount of pressure when it comes to live gigs.

The Blacks Key’s new album, Attack and Release, has been hailed as the blues records of 2008 and shows how much Dan Auerbach and Patrick Carney have progressed musically, managing to get themselves a legion of new fans as well as impress critics in the process.

A fairly crowded ABC and a rapturous reception from the crowd marks their arrival on stage;
Dan Auerbach looks remarkably like a slim-line lumber jack, and his towering cohort drummer resembles your typical indie/emo kid with thick glasses and jet black wavy hair.
Auerbach’s vocals are definitely something else, moaning like an old blues master he wouldn’t sound out of place on a Led Belly record.

The band start with ‘Girl is On My Mind’ from third album Rubber Factor, which inevitably gets a good response. ‘Set you Free’ and ‘Thickfreakness’ are soon to follow before the duo launch into the new stuff. ‘Same old thing’, arguably one of the finer points of Attack and Release, manages to keep its ruff bluesy charm when showcased live.

Surprisingly songs from Attack and Release don’t dominate the show as you would expect, the set a fairly even mix of the bands five albums.
Classics such as ‘You’re Touch’ and ‘Busted’ provide more rock and blues riff fun while newer tracks such as ‘Strange Times’ and ‘I Got Mine’ do the business just as well – Auerbach’s guitar playing is flawless as usual, combine this with Carney’s john bonham-eque drumming and there’s no room for a bassist here.

A very good performance from the Ohio boys, and atleast this time we got an encore