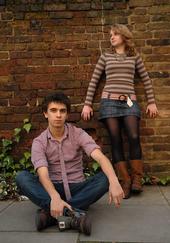 The Clik Clik – Did You Wrong

Starting with the rather matter of fact line “I fucked up” this song instantly endears itself to you. “Did You Wrong” is about a relationship that went bad but as they used to be friends he’s trying to say sorry, not exactly new ground but has the cute addition of the girl’s point of view.

The Clik Clik are a foursome from Fulham. Vocals come from Stefan Abingdon, who also plays guitar, and Maya Yianni, who also plays the keyboard. Backing them up are Henry Bauckham on bass and Dru Wakely on drums.

The music itself is advertised as indie electro pop; well the pop is clear but there is more input from punk and dance on “Did You Wrong”. However this just shows how easily these youngsters turn their hand to a new genre. The Frankmusik Remix which is the single’s B-side is much more electro but it doesn’t work as well as the radio edit and the other B-side “My Dunks” sounds like a second-hand Black Eyed Peas track.

The Clik Clik are talented youths with plenty of influences to draw on and more than enough energy and enthusiasm to pour into their music. In comparison “Did You Wrong” is an average release, it’ll get them started but they’ll need better if their success is to match their ambitions.