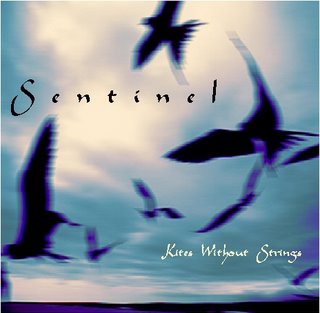 Sentinel are back again. Kites Without Strings is a fairly short album (8 tracks) but its packing a punch. They seem far bolder than ever before – rocking up the rock aspect of their act as well as the vocals being as dreamy as ever.

What is perplexing about Sentinel is that they seem to have been around far longer than they actually have. There has been two previous albums and even a Singles album passed through the Glasswerk reviews. And yet they have only been an act since 2006.

Its nice then to see that they have retained their image and also checking out what they can do with it. ‘Kites Without String’s in an altogether friendlier affair and probably their most pop album so far. A bit of easy access won’t hamper their artistic integrity.

Founding members Dennis Bestafka and Tatrabud the Guitarist and Vocalist respectively are probably the two members that carry the most signifing sound that is Sentinel. That doesn’t seem to be changing anytime soon. Sentinel are therfore blessed with a sound that is immediatley identifiable. ‘Kites Without Strings’ continues that sound. Sentinel now has a solid back catalogue that they can now hope will stretch overseas and grab new listeners. And anyone who likes the sound of a track they may hear is bound to find it easy to like the rest of their wonderful collection.