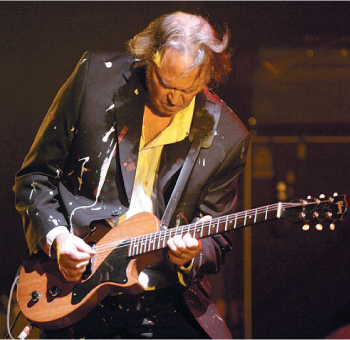 A festival traffic jam is a great leveller; whether you’re in a BMW or a tractor you can’t buy yourself passage. Row after row of cars sat in darkness, each sending their own playlist in to the Kent countryside. By 2am the gridlock jossled its way out of the farm’s fields and memories of the music flooded the frustration. Vince Power’s Hop Farm Festival didn’t allow anything to detract from the performers. Devoid of VIP areas and sponsorship the music was almost always centre of attention. But for an angry, unpredictable sky eyes would never have left the stage.

Eight acts played one stage for 30,000 people, almost all of whom came to see one man and a good number with the mythical figure’s face printed on their t-shirts. Neil Young performed a two hour set very similar to those of his recent European shows with The Beatles’ ‘A Day In The Life Of’ again used in encore.

The whole performance was full of intrigue from Young’s wife Pegi’s beguiling backing vocals to live interpretative painting displayed for each song. Young, dressed in a luminous splattered suit is – as Jeffrey Lewis sang – a standard of songwriter other musicians can only fail to reach. It is testament to the man that here ‘Spirit Road’ and ‘No Hidden Path’ from new album ‘Chrome Dreams II’ only served to add soulful reflection on an incredible past.

As his band created a beautiful soundscape Young jerked across the stage producing epic noise and manic feedback from his electric guitar, as though this was his last show on earth. Lit by two roadies perched among the scaffold and following his every breath he stood, near blinded, long grey hair blowing in the wind, concentration etched in wrinkles the man had the crowd stuck in an endless moment. His voice remains a miracle; peerless on epic short-player after another and constantly drawing our breath. Young could put an ounce of the effort in that he does, rely on the voice and take the gold rush, however his passion is unwaivering. Ending ‘A Day In The Life’ playing so hard the strings broke one by one Young exited, light shining upon his perfectly rounded bald patch. A man for the people this music monk.

‘Love And Only Love’
‘Hey Hey, My My’
‘Everybody Knows This Is Nowhere’
‘I’ve Been Waiting For You’
‘Spirit Road’
‘Fuckin’ Up’
‘Oh, Lonesome Me’
‘Mother Earth’
‘The Needle And The Damage Done’
‘Unknown Legend’
‘Heart Of Gold’
‘Old Man’
‘Get Back To The Country’
‘Words’
‘No Hidden Path’
‘A Day In The Life’

The undercard was truly hit and miss. The hits were big, the misses woeful. Primal Scream filled their set with too much new material and the crowd only emerged from their indifference when Bobby and Mani brought out the three big finishers – ‘Swastika Eyes’, ‘Rocks’ and ‘Movin’ On Up’.

Supergrass have stretched a few tunes a very long decade and filling an hour here was way beyond them. ‘Alright’, ‘Moving’ and ‘Caught By The Fuzz’ made for another good close but what went before could be thrown to the festival bins. Even their best is performed without the buzz of britpop; it’s high time for that overdue break-up.

Rufus Wainwright could have filled their set many songs over, yet he was given less time to thrill. The ‘Gay Messiah’ played his own title track and sent the rain away with a flourish. Playing solo with nothing but a piano, guitar and his wonderous vocal Rufus sings sad but had most happily captivated, even the kids: “I liked ‘Hallelujah’ best, it was in Shrek!” My Morning Jacket followed with their unique, other worldly harmonies and deep recuring keys and bass. The set bred well-being and you floated along with the endless songs. This is a band of albums, they don’t make conventional singles.

Laura Marling was on unlucky second. The delicate one played her appropriately somber laments on love and loss through blankets of rain to a distracted, cowering crowd hastily packing away their picnics. She was lost to many, she should always be loved. Everest and the Guillemots, well they were instantly forgettable.

The Hop Farm Festival was anything but. A memorable billing, which will be nigh on impossible to match next year. We wait with great anticipation to see if it can be done.