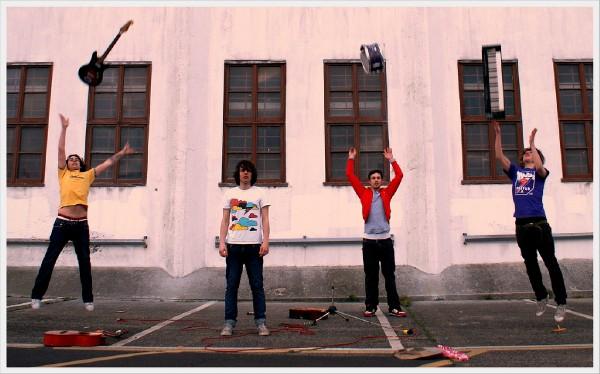 Newcastle’s infamous Cluny bar was, and always is, reasonably busy for a Sunday evening. Though the venue itself wasn’t particularly bustling there was a healthy if divided crowd mainly consisting of the demographics typical of nights like this, A showcase event of varying degree’s of talent some attracting more hype and with more of their eager feet over the ‘making it’ line than others.

The audience were a mixture of dedicated supporters of each band and the odd onlooker having curiously wandered in from the bar next door. Four bands were on show in total but this reviewer was here, dominantly, for the Little Comets set, curious to see how their own brand of youthful indie funk pop would convert on to a live set.

The Newcastle four-piece entered with their dangerously catchy number ‘One Night In October’ which translated triumphantly live. The band played a tight set and appeared far from disgruntled by the modestly enthusiastic crowd. They played with a jaunty, energetic charisma more experienced groups could take a note of and although their demos create a slight illusion of an altogether bigger noise, the smooth, layered synchronisation between the band that could be heard on their singles resonates faultlessly live.

They played their way, effortlessly, through a short but sweet set of stomp alongs including their radio friendly groove ‘Lost Time’ and the sharply delivered Futureheads-esque ‘Adultery’. The animated drumming played a significant part in the set and they managed to pull off some well synchronised harmonies and impressively clear vocals.

The lads have been known to play on trains and to relentlessly hand out demo’s anywhere and everywhere. They have an enthusiastic, optimistic approach to what they do that translates well into their onstage ambience. Although the set was short and their may indeed be such material up their sleeves, it would be interesting to hear something a little more delicate, with a slower tempo perhaps.

With a voice as good as Roberts a tender offering would help to further prove their worth and doesn’t seem unreasonable. Nevertheless they shone and impressed and with the freedom a longer set can offer and on a grander scale you get the impression their ego-less, energetic playing may prove to do so to an even greater extent.