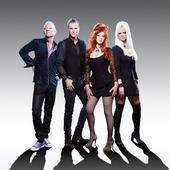 This years comeback kings and Queens are The B-52’s. A new album “Funplex” is out and this electronic popcentric single has been chosen to navigate the charts.

Well… we are a long way down the line from “Rock Lobster” and “Love Shack,” instead what we get is a B-52s dance track. So perhaps they don’t want to be the fucky 80’s band they are reknowned for being. Time for something different. The bizarre thing is that as fun as it is listening to how good Kate Pierson still sounds, and how crisp the electronic music is – they actually sound dated by about 10 years. So maybe this song would have been a good idea back in the mid to late 90’s. Nowadays most people want to hear throwback music. So if they had infact replicated themselves from the 80’s then they probably would have been onto a winner!

Kate Bush did that a few years ago when she released her big comeback. She did not deviate from who she was and how she sounded and it won her praise all round. Perhaps the B-52’s needed to be paying more attention to the world around them if they are to be accepted again.