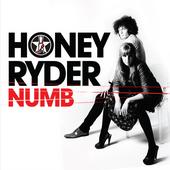 Honey Ryder are in fact a duo from London comprising Martyn Shone and Lindsay O’Mahoney and “Numb” is their debut single release.

The Radio Edit of “Numb” is pop rock on an epic scale with a hint of dance in the beat. It is quite good and could easily be the chart success that many are predicting. However, unusually for this sort of release, the single contains two B-side remixes which are completely different from the A-Side.

The Papercuts Ibiza Mix is the best of the two, using the vocals to create a haunting melody over the pounding backbeat. The Longbeach Mix takes a more chilled-out pace drawing on ethnic rhythms and a little electric guitar to take it to a crescendo. It wouldn’t be very surprising if it were one of the remixes that became better known, particularly the Papercuts Ibiza Mix as it had all the hallmarks of a summer dance floor success.

It’ll be interesting to see what Honey Ryder come up with next following such a mixed bag of music all stemming from just one track.