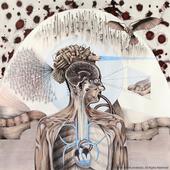 The music industry is a cold and heartless beast, or as Hunter S. Thompson put it, “A cruel and shallow money trench…” Now without taking that quote out of its original context (Thompson actually uses it to glorify the music trade) for the purpose of this review, I include it to highlight the importance of people like Dan Wallace. A man that proves it’s not all about crack, lawyers, leeches, pimps and preachers.

Dan Wallace is an enigma in the modern music world. An anomaly of strange and wonderful sorts that makes you realise it’s not all bad (or good, as Thompson would twist you into believing.)

Standing like a beacon in an ocean-sized swamp, Wallace embodies not only the sound of wild and rumbustuous past generations, he surrounds it in a spirit and aura of independence. What is there to respect anymore if not independence? Out there somewhere in Chicago where the sun beats down on the wind and burns the streets like magic magma and dust covers the invisible pain of bad trips on the great lake, there is a sound that doesn’t quite flow. A sound as distant from the location as it from it’s time.

Reattachment is pop sugar from a sperm whale’s blowhole, it’s funky melodrama and twisted irony, and an almost lazy rhythm ‘n’ blues. With a tidy gloss like prehistoric amber-coated fossil this post-modern organism is the 2007 vintage homebrew right out of an Illinois wine cellar.

Now, I’m talking collectively rather than track specifically. It doesn’t matter to me if you buy Reattachment, Culture of Self or Neon and Gold. They’re all special pieces of work as far as I’m concerned and they don’t sound all that different from each other. If per chance say you listen to Dungen, The Shins, The Eels and Zappa then add this man to your collection of unerring folk pop music.

Dan Wallace sends out his music personally because he specifically wants you to hear it. He even signs the cover letters himself. Crackers, I know, but it’s the little things that make the difference nowadays from the pits of this “cruel and shallow money trench”.