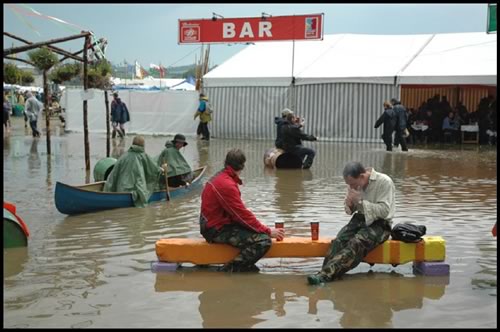 There’s mud, that’s for sure. Not at Glastonbury levels, but enough to make wellies a necessity. It’s now Saturday morning and the sun’s out, but another deluge and I fear a mudbath.

Day one has been successfully negotiated, and Team Glasswerk still has its’ full compliment. Amidst the tent-making, drinking and general cavorting a few bands were even seen.

The Whip were the highlight of the early afternoon music, the crowd pogo-ing, pointing, waving and clapping as directed by the band, who’s drummer even left her post to indulge in a bit of crowd-surfing, leaving a band-mate to pick up her sticks and keep the rhythm.

Crystal Castles were predictably insane, she spending more time trying to join the crowd rather than sing from the stage.

Half of Team Glasswerk opted for the fireworks and exubherance of Metallica, while others opted for The Cribs, but only because of that one song with the naked girl in the video (oh dear – ed). Which we waited 45 minutes for then legged it for the guest area for schmoozing and shenanigans. Which actually means we all collapsed, went to bed; some of us throwing up. Ace.

Now it’s day 2 and more action will be revealed tomorrow..