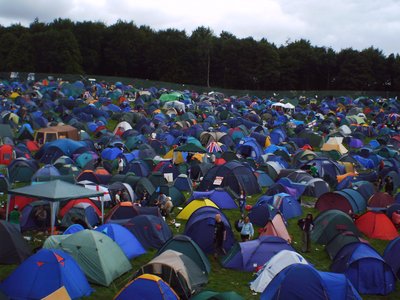 Yet again Leeds has been pretty lucky with the weather. Sure it was wet in the days leading up to the festival which led to a boggy mess, but aside from a few showers it has mainly been pretty dry over festival weekend. The Sun has come out for the final day and by mid afternoon there are lots of very burnt people in the arena.

It’s a busy day for the Glasswerk crew, lots of great bands to see and also interviews to conduct with The Subways and We Are Scientists. Random Hand’s ska-metal was a great way to kick off the day, while The Automatic were predictably chirpy as they woke up the main arena with “Monster”. Thrice play a strong set, yet are not as dynamic as might be expected, perhaps it is a Sunday afternoon thing.

Editors were probably good but we only heard them from the press area, their set being moved earlier to accommodate their REM support slot in Manchester later that evening.

Bullet for my Valentine were main support in the Radio One tent, and with a show full of pyrotechnics put on a great performance. If you like that sort of thing.

The Manics headlined and there was a notably increased sense of anticipation, building to feverpitch between the lengthy half hour change-over. With the tent packed to the rafters and the crowd moving side to side and up and down like a tornado picking a fight with a tsunami, this was not one for the feint-hearted. Likewise, it was not a set for the faintly-fond of the Manics… There are only so many hits you can fit into a greatest hits hour-long set, and with the band choosing to stick in a few less well-known numbers, there was no room for the likes of Everything Must Go, Kevin Carter, Australia etc. For those who only discovered the Welsh Rockers when Libraries Gave Us Power, and for whom The Holy Bible may have been something The Arcade Fire did, this must have been a disappointment. Still, classics such as Motorcycle Emptiness, You Love Us, If you Tolerate This…, and abortion, left most content.

A great way to finish the festival and the decision to see them over the Killers was certainly proved well worthy.