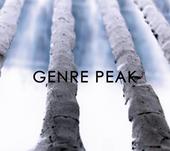 Preternatural is the new album from Californian three-piece, Genre Peak.

This album is full of trance / electronica tracks. Laden with synth and samples, it’s sometimes difficult to know where the guitars feature and where samples take their place.

Perhaps typical of this genre, so to speak, the lyrical content is at a minimum. Those lyrics that do appear in tracks however are well though out, although a little dark.

In my own opinion this album will appeal to those with eclectic tastes. If you like your post night-out chill music then this is a good one. Put it on, find something to lounge on and wind down.

‘Wear it well’ is a good laid back track which has mellowed my fraught mood today. ‘Blue Filter’ with its vocal combination between Martin Birke and Tara C.Taylor works really well. On this track Martin’s vocal styling has a David Byrne feel about it. ‘Wear your ruin’ is a bit more upbeat, but still maintains this trance vibe that runs throughout the album.

I’lll confess that I’m not usually a fan of this kind of music, but this album is well constructed and mixed. The lyrics don’t overstate the tracks, they compliment them. The synthesized elements are an assault on the senses. They’re just there.

If you’re looking for something to chill out to after a night on the tiles, and fancy something moby-esque, then consider this album. Nicely done.