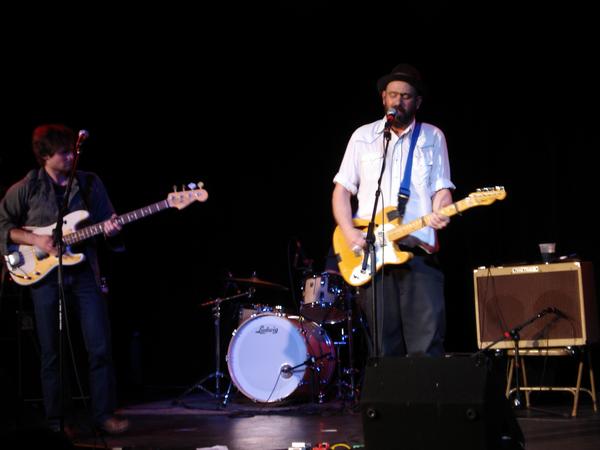 “When I was in love I was terrified of flying, but now i’m not I don’t give a shit.”

A hundred almost fill the theatre seating as audience and band await the arrival of American Music Club leader Mark Eitzel. All a scruff he shuffles to his microphone post and seems rather edgy to have silent eyes awaiting his move. With battered hat, unruly beard, holey slacks and constantly grabbed demin coat Eitzel would be more at home in a saloon using his black humour and sharp songs of loneliness and decay to gain attention.

Here were fans citing American Music Club as their favorite band, calling out with glee as each song was announced, and those who came to discover why Radiohead and Elbow are in such thrawl to this underground, San Francisco based band of misfits.

With a prolific catalogue of eleven albums released over the past twenty three years Eitzel has many classic downers to pick through. Tonight’s set list, scrawled upon a ripped up brown paper bag, drew heavily upon 1993’s ‘Mercury’ from which ‘Apology For An Accident’ sums up Eitzel’s mix of bitterness and humour. “And I hate to see all your sweet words go to waste//but honey they’re a little weak for my taste.” Despite such private darkness this is a highly charismatic man. Talking of a depressing friend Eitzel dryly summed up his dilema of just walking away. He didn’t but “there’s a fine line between being constantly miserable and being an arsehole.”

From opener ‘What Godzilla Said to God When His Name Wasn’t Found In The Book Of Life’ the song titles got shorter but few could match the immediacy of the start. Moments of beauty and songwriting genius were thick but rather than captivating your undivided attention minds drifted. Guitarist Jonathan Heine brought them back stroking his strings to create a floating euphoria around the stage (‘If I Had a Hammer’). In encore, with a flick of a pedal, the band could smash in to an ear bleeding My Bloody Valentine wall of sound (‘Fearless’), which had been preceeded by the ode to the Twin Towers’ bar ‘Windows On The World’. Just days after the anniversary these lyrics, full of life, seemed a fitting tribute to those who worked up top and to a near forgotten band. “I remember trying to bore the poor bar maid//I said you know babe from here you can see forever//she said yeah I know, I got it made//Here’s your fucking beer.”

Tonight was not a show to proclaim the greatest but as memories of such rash judgements at buzz showcases turn bad you get the feeling this honest, sometimes incredible show will slowly settle as a near classic.