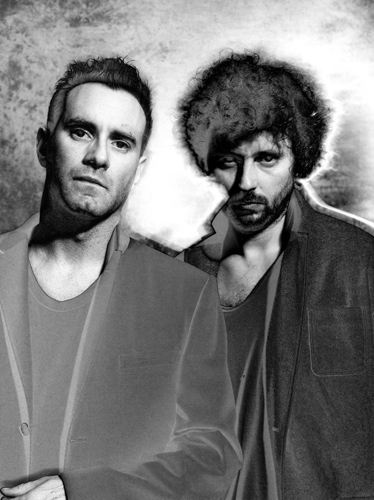 Two lights blink. The projections behind the stage pan back to reveal a satellite all alone in space, as “Pure Imagination”, Willy Wonka’s ode to childlike wonder, emanates out of the speakers across Koko. It’s an astonishing opening gambit and with the audience’s breath suitably baited, the gospel-drone rock of “The Answer” kicks in and UNKLE have announced their arrival.

In the 12 years since DJ Shadow-assisted debut album “Psyence Fiction”, UNKLE mainman James Lavelle has gradually shifted from its beginnings as a trip-hop side project with famous mates to a fully-fledged rock band. After the other longest serving member Richard File left in 2007 (to form We Fell To Earth), this year’s “Where Did The Night Fall” was written with new man Pablo Clements, who spends all of tonight hidden behind lots of complicated equipment, and successfully consolidates their position as a halfway house between Velvet Underground and Massive Attack.

Most of the new album gets an airing tonight, and although the sold-out Koko crowd has only had 3 weeks to get to grips with it, the new songs are good enough that no one is heckling for the likes of “Be There” or “Rabbit In Your Headlights”. After opener “The Answer”, which sounds like My Bloody Valentine playing at the creation of the universe, we are treated to an absolutely staggering first half, including the visceral thrill of “Chemistry” and current single “Natural Selection”. Both show off UNKLE’s formidable ability as a live band, and are complemented by visuals that could easily grace an arena show rather than this decadent Camden theatre.

One obstacle for UNKLE to overcome live is that their albums have always tended to be overshadowed by the amount of guest vocalists they use. Although Lavelle occasionally ventures out from behind his decks to add vocals – notably on “Ablivion” – Gavin Clark is the touring vocalist and an able frontman, impressing on “Keys To The Kingdom” (from 2007s “War Stories”). Lisa Elle from support act Dark Horses replaces Katrina Ford on “The Runaway” (a quick note on Dark Horses. They sound exactly how you’d expect a band who are called Dark Horses and have supported BRMC as well as UNKLE would, and are most notable for having a member whose main job is to beat a drum with a chain. Imagine Bez if he’d joined Sisters of Mercy and you’re there).

Other songs use pre-recorded vocals with mixed results. “Follow Me Down” is stripped of its power with Sleepy Sun’s unhinged performance restricted to a sample. Yet the show’s undoubted highlight is the one-two punch of “Reign” and “Restless” that comes halfway through. With a rotoscoped Ian Brown and Josh Homme miming along to backing tracks on the screens behind the stage, the band lets loose and the crowd goes absolutely wild as “Restless” in particular lurches into its booming motorik groove. Although the pace and the set sags a little in the second half, the Eastern trance of “Eye For An Eye” sees a proper hands in the air moment to end the main show with.

An encore of “Heavy Drug”, “Lonely Soul” – in which Clark sadly doesn’t quite match the raw anger of Richard Ashcroft, although there can be no real shame there – and the Spiritualized-gone-techno of “In A State” ensures the crowd is given a send off they can dance to.

Through all this, Lavelle seems genuinely humbled to be feeling the love, at one point noting that his dad is in the audience for the first time. Having worked with some of the biggest and most revered names in music, it’s a touching reminder that James Lavelle feels he still needs to prove himself as a legitimate rock act. With a live show like this and his continuing ability to put out great albums, he needn’t worry.