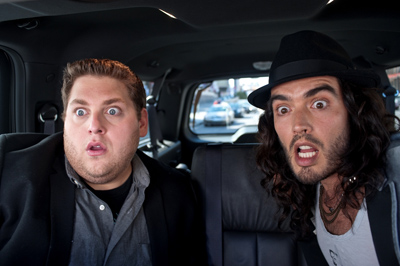 Get Him To the Greek Comp

Anyone who watched Forgetting Sarah Marshall, probably did – but remembered the scene stealing support played by the UK’s own Russell Brand. Taking full advantage of those both star and studio has worked up a spin off/sequel of sorts that follows the exploits of Brand’s Aldous Snow as he is chaperoned from London to the U.S in an attempt to save his career.

The film comes out later this month and a competition is being run to give you a chance to win a couple of tickets to a London screening of the film:

Win a VIP preview screening of Get Him to the Greek, plus the chance to see Aldous Snow in the flesh!
That’s right we’re giving you the chance to prove that you’re Aldous Snow’s number 1 fan, and the reward could be a pair of tickets to see both him and the film in London!
All you have to do is call rock star Aldous and follow his instructions 07585 064258*! (*T&C’s apply)

Or, visit link for a chance to enter.
So, who wants to see Aldous in the flesh?!

Get Him to the Greek is in cinemas from 23 June. Starring Russell Brand, Jonah Hill and Sean Combs!