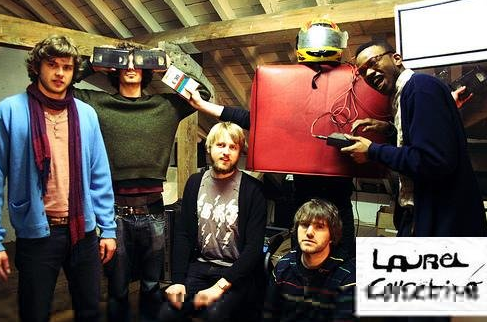 Laurel Collective have been sweeping across London for a few years, in fact they seem to have always been here. Not surprising then that their sound is a mature, angular mix of obscure, quirky pop that’s now starting to sound very effortless. Their new single ‘Sunshine Buddy’ is out this month, but before it lands, we grabbed a few minutes with them.

Let’s kick this off. What’s a ‘Sunshine Buddy’? It sounds sexy.

They're these little plastic coloured Japanese toys. They are little solar powered plastic dudes who just have this fixed smile and sway their head from side to side when it’s sunny. A bit mental.

Is ‘Sunshine Buddy’ a good example of what the album will sound like?

When can we wrap our ears around it?

The next single “They Hate Me” is out later this summer and the album is scheduled for October/November – we have finally set a date for when it will be finished.

It’s been a long time in the making. Has it become a different beast to the one it was when you first put pen to paper?

It's definitely evolved. There's a good 20 songs floating around, the album will be the ten most coherent ones. As a group, we fight to get it to sound the like the same band. It's a constant battle with our own attention deficit disorder. Hopefully on the record you will hear that we've won this battle, but have sort of been messed up and battered in the process. It's a victory that would shock even Pyrrhus.

Where do you fit in with what’s happening to British music lately? Your music is mature and seems to mean something – does that put you at a disadvantage when compared to bands such as The Wombats and Brother who sing about f*ck all? Aren’t you worried about not getting onto T4?

Hmmm… No not worried. We've always liked more mysterious, enigmatic bands like The Invisible, Micachu and the Shapes, Deerhoof or Beck. The brutal truth is, most music is not really that great, the thing about being a music lover is finding that great new band among all the crap. As Jeffrey Lewis sang, “it takes a lot of effort just not to suck” which is very true. Often, that band you find that you love is saying something very personal that reflects in your individual character. I would always want to be in this sort of band. We could never just make a folk album, or a garage rock album, not even to make a bit of money, although there are some great garage and folk bands out there at the moment – like Pete and the Pirates or The Castells for example.

If given the opportunity, whose fans would you like to steal in one swoop?

Personally I would like to steal all Robbie Williams fans, mainly for the cash. Then I'd put them in this Communist style re-education centre and hopefully they could find the inner sense of peace that has eluded them for so long because they loved Robbie Williams.

Last year seemed pretty quiet for you, but at the same time you did a f*ck load of awesome things. How will the rest of 2011 pan out? What’s the master plan, and do feel free to embellish if you wish.

Well, with In the Woods on September 3rd, which has Dels, Peter and Kerry, Dogtanion, Pete and the Pirates, Man Like Me and Kwes as well as a host of exciting new bands playing in a beautiful forest, happening around the time of our debut album release- that will be a very epic month for us…

Last year you won the Red Stripe Music Awards, but what did you actually win? Massive cash prize, infinite supplies of beer, maybe a horde of Jamaican princesses?

We won a load of Fender backline, a load of booze- Red Stripe and Gin, some amps, including a lovely Fender twin. We also supported Marina and the Diamonds at The Great Escape which was a lot of fun. I want to win some more booze actually. And a horde of Jamaican Princesses would be pretty good too, although I suspect Red Stripe is brewed in somewhere like Swindon. I'm not sure what Swindon Princesses are like but they are welcome to come and hang out in the tour van.

You’ve lost the “the” from your band name, are you at all gutted that your initials no longer spell out TLC?

True, it is a shame we are no longer TLC…we also no longer say or write this word, which is proving very hard.

Do you agree that All Saints are better?

No, actually I prefer TLC. First, they are from Atlanta, Georgia, home to Deerhunter and Outkast. “No Scrubs” is one of the best pop songs ever. They all had nicknames like “Left Eye” Lopez, which is way cooler than Natalie Appleton. They sold 50 million albums more than All Saints. Plus Rozonda “chilli” Thomas was in the Hype Williams film “Belly.” In contrast, All Saints were on Big Brother, Celebrity Hijack….