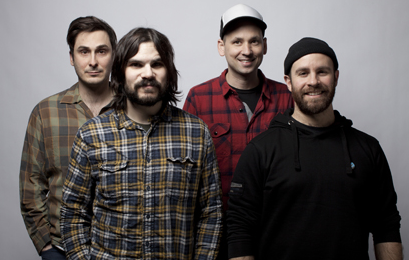 Chicago-based indie-stalwarts Joan Of Arc are in the UK in June in honour of their latest album, Life Like. Glasswerk caught up with them to talk Chicago, the past, and the future.

Joan of Arc have been in existence for 16 years now; has it just felt right to keep going under that moniker when other bands might've started afresh?
Eh we've started afresh a few times as other bands and as Joan Of Arc. We've stepped away from Joan Of Arc and focused on other bands for a couple years at a time a few times, but as soon as that opening appears – someone feels restless or goes through a breakup, Joan Of Arc reactivates. I've tried to retire it a couple times and my friends won't let me 'cuz they need it for a tour or two and then I'm stuck with the thing.

Your releases are often pretty contrasting to the previous, A Portable Model Of… seems quite a way away from Life Like in some respects – do you have a favourite album or sound you can put your finger on?
I don't listen to them once their done, so I can't really speak to the record itself, but only my impression of making it, how close we came to realising whatever ambitions we had. So in those terms, I'd say my favourites are probably “In Rape Fantasy and Terror Sex We Trust” and “Flowers”. We don't play many of those songs live anymore, they don't work so great in that context. But as records, when the record is an ends in itself, those two stand out to me.

As a collective, there are dozens of influential indie/emo bands that have a connection to Joan Of Arc, and in my opinion you've been at the forefront of both genres for a long time now.  Is the tag often labelled at you as 'pioneers' a comfortable one to bear?
Eh, that's not something I think about. Sometimes people at shows will be weird to us, but I imagine if I was a bank teller people would sometimes be weird to me at work 'cuz I was the bank teller and they expect certain things from that role. Turns out my role is the guy in a band so people bring their expectations of a guy in a band to me. It's fine. If we've pioneered anything it's probably the pigheadedness to just keep going even if the common ideas of rewards of band life have never happened for us. Turns out we like the process of the thing itself. That seems like it should be simple and obvious, but in the upside down world, maybe that's pioneering in some way, bumbling, dufus pioneering.

How excited are you to tour your latest album, Life Like?  Do your older tracks keep their place in your set?
I'm pretty blasé about touring. I'd rather be at home, and when I say at home I don't mean just Chicago, but in my apartment. I love playing music, but the other 23 hours a day are more often tedious than exciting. It's great to see new places, but usually we mostly just see rock clubs. And i cant really work on things I'm excited to be working on. But it's fine. I don't think I can do it much longer, but it's fine for now. And old songs – different one's always pop up according to the lineup. Often we won't play a song for years at a time, sometimes 5 or 7 years, then we'll rearrange it at a soundcheck or something.

Would you agree that Chicago is the home of indie/emo?
I've never thought about it that way. And it sure doesn't feel like it from inside of it, but maybe it appears that way from the outside. There are a lot of labels, websites, agents etc. based there.

What does the future hold for Joan Of Arc?
We're mixing the soundtrack we wrote for The Passion of Joan of Arc, the old silent film. We have a couple performances of that and a lot of rock shows. I have a novel coming out in September and am excited to get home and flush out the first draft I have done on a second novel. Hopefully I can figure out how to stay home and concentrate on that.

Two of you were in Cap'n Jazz, and played a couple of shows last year for the first time in a long while.  How did that feel to be back playing those songs after so long?
It was fun, much less embarrassing than I expected it to be. There were some pretty corny parts, but overall I think the songs seemed more immediate than I would've expected. That's probably just a matter of our attitudes towards it. We really agreed to do it only for the money, but we didn't wanna fuck it up and embarrass ourselves, so we worked real hard at it.

Joan Of Arc are in the UK in June; more information can be found by following link.