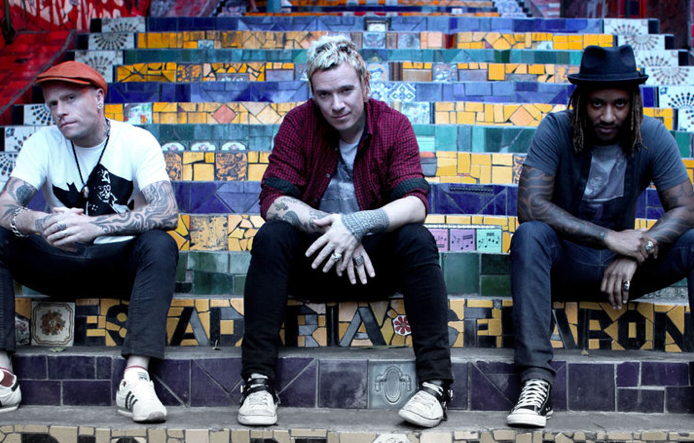 The Prodigy's live album/DVD World's On Fire is out May 23rd 2011, and Liam Howlett of the group has been talking to Martin James about its release.

“To be honest I was uncomfortable about doing the gig in the first place you know. We never wanted to be like the type of band playing stadiums or whatever. We still love to play Brixton, that’s what we’re about. But people just kept saying we should do it and I was like ‘we will only do it as our own festival, not a Prodigy gig with a support act.’ So we put together a good line up of bands and DJs, a cool small second stage, we even had a tattoo tent doing ant logos… it was a celebration of twenty years. We wanted to put on a proper day and night for the people like Knebworth and Oasis.

“In a way it was a bit of an accident really. There was never a master-plan to it. We wanted to do something special to round off the whole Invaders time. You know, that album was a great thing for us. It brought out all of the old skool fans again and took us to a brand new generation of fans. So we wanted to do something pretty special to leave our mark. We chose Milton Keynes Bowl in the end ‘cos it reminded us of going to an old rave, a big green field. It had that energy to it.

“I’ll never forget the feeling going on stage, it was like… fucking hell. I don’t get nervous at all, I mean we’ve played to bigger audiences and played bigger festivals but it was like, hang on a minute, these people are here for us… We were a few songs in before I started to enjoy it. There were lots of emotions involved, there was a twenty-year build up to that gig. It was almost too much.

“We put a lot into choosing the songs. We wanted to keep the energy going but still wanted to play stuff from every period of The Prodigy.  People would expect stuff like ‘Firestarter’ and what have you, but we wanted a few surprises in there too. We did ‘Weather Experience’ and had those lasers in the show as a respect back to the early rave era.

“That day was very special and we’re proud of it.“

“It never interested me just to do a live DVD but this is a live audio album with a DVD in it! I wasn’t up for a live DVD at all, and to be honest I don’t like live albums so that didn’t excite me either. But when Duggers (Paul Dugdale) started showing me some of the footage he’d put together I started thinking it might be good to do a few tracks. Maybe put them online or something. Thing is, he’d managed to blag loads of kit for the day so we had a lot of great footage. When he started putting it together it had a real energy and I started to warm to the idea. So it came about through us liking what we were seeing and hearing which is the only reason to do it.

“We’ve released live tracks before but never thought of doing a live album.  I started mixing a couple of the tracks and it sounded big. It couldn’t be just an album of songs played live but also an accurate representation of what it was really like. Mixing in the 5.1 surround really made me feel I was in the middle of that crowd. If we were ever to do a live album, that’s the gig it had to be.”

“You know, I can’t believe that we pulled that off.  People were dancing in the aisles and shit and dancing on the stage in cinemas around the UK, that was great. We were one of the first bands of our type to do this but even when we were watching the film in a cinema before hand I was like ‘not sure if this is gonna work’ It was just too quiet in there. I kept shouting for them to turn it up but they were at their legal cinema limit…  But the fans went and got totally into it, one cinema kept turning the sound off coz the stage kept being invaded.”

“Paul Dugdale had done these teaser films for our Warrior’s Dance Festival and other festivals, and they were fucking sick. They went on You Tube as virals but it felt right to have some of the film stuff he’s done on the road as a part of this release. He’s really captured the energy of the band and the films kind of sum up where we were at that time. This live album and DVD is like a summary of The Prodigy so far. From here on who knows?”

“We’re back in the studio starting the new record. We’re a lot more prepared this time. I’ve been working when we’ve been on the road and it’s a much less pressured situation. It’s always the first two tracks that are the hardest. I’ll try out loads of shit and then something will emerge, give it direction and shape it. All I know is it will be dirty, heavy, unsafe and sound like the prodigy!”