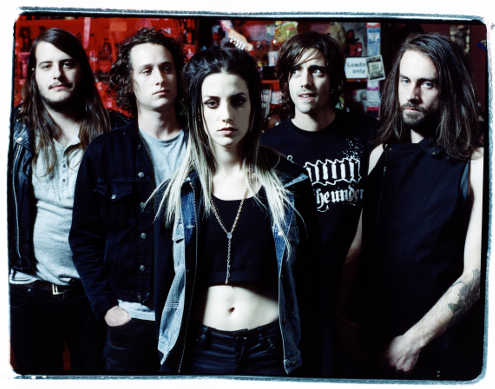 It's been a hazy, dream-like 2011 for Japanese Voyeurs so far. Their album Yolk is doing big things right now, and they've recently played both Sonisphere and BBK in Spain. Glasswerk thought it might be a good idea to catch up with lead singer/guitarist Romily from the band…

First off, let's get a mission statement from you.  Who are Japanese Voyeurs and what have you come here to do?
We're a heavy band compiled of 80% southern and 20% northern humans. We're interested in making music that makes you feel something, to wake you up from the reality TV coma and make you remember that you have a soul.

Your debut album – Yolk – came out last week, how proud of it are you?  Any personal favourites on the album?
Very proud. I mean for most of us, putting out a record has been a dream for a long time so to see that realised is a good feeling. Especially when we can put our hands on hearts and say that we didn't compromise or change it for anyone, we made it exactly the way we wanted it. I guess the favourites tend to be the newer ones, personally though my favourite part is the ending of blush.

You went all the way to Vancouver, Canada to record with Garth Richardson, who has worked with some of the all time greats and must have a wealth of knowledge about the genre.  How did he help you? What were the best and worst things about working with him?
Honestly there were no bad things. He's definitely one of the greatest most inspirational people we've met. To be that successful and yet that kind and generous with your time and talent is pretty mind blowing. Before we met him the idea of working with him was daunting considering the calibre of bands he's produced, but once we met him and realised how seriously he was taking his responsibilities as our producer and how good he was at challenging us and nurturing us simultaneously, our fears were well and truly dispelled. The whole experience was very intense and hugely rewarding.

God calls you up.  He's putting on a show, and he's asked you to curate it.  You have complete control over the venue, acts – alive or dead.  Who and where?
I love it when God calls me.
I think the show would look something like this…

LOCATION – clearing in Stoneage wilderness complete with man-eating guard-dinosaurs, spewing volcanoes and scantily clad caveman babes. The stage is built out of a sturdy wood and root based platform which has been securely positioned on top of original pieces of stone-henge. Many viewing platforms have been erected and are hanging from the prehistoric trees. Friendly herbivores are also available for rental as another seating solution (complete with ice cool beer in crates attached via a pulley system to their necks for easy access.) There will be no food available ready made, all patrons will be able to purchase a variety of hunting equipment (bows and arrows, harpoons, lassos, traps etc) which they will then use to go and forage in the wilderness and hunt down their prey to the soundtrack of heavy metal. Entertainment will also come in the form of the cult movie PIN about a mannequin who comes alive (or does he?) which will be screened in the pin-cave 24 hours a day.

LINE UP- this is a week long festival but there is no handy laminated schedule.  Set times are allocated through a complex system of drinking games and advice from medical professionals. this will keep the bands heavily inebriated but also slightly nervous- a great combination for ensuring a good live show.

The culmination of the STONEAGE SESSIONS will be the 7th day which, contrary to popular belief is not the day of rest but the day of rock. All 21 bands will play at the same time on the same stage. Over 100 amps, 20 microphones, approximately 80 guitars and 21 drum kits. They will play a selection of popular medieval songs as well as the disney back catalogue.

NB: anyone found with any manner of ear protecting devices will be evicted.

Wow, i've gone really overboard on this, i actually think its happening.

Sorry to get your hopes up. You guys went down really well at Sonisphere the other week – how much fun was that?  Did you get the chance to watch many other bands?  I know you were at BBK the next night…
It was a really good day for us. We've been going for a while without playing to those kinds of crowds so we're not used to such a kind reception. The thing with support slots is that you get used to trying to win over a hostile crowd which can be a tough slog, so shows like Sonisphere feel pretty amazing.

We had to leave a couple of hours after we played but we managed to persuade our tour manager to let us stay for slayer which was heavy as hell. By the time we got to BBK we were in a pretty strange state. Playing your biggest show to date hungover and with 2 hours sleep is probably not a great plan. It was fucking surreal but we had a good time, sea sick steve said we were “so rocking” so that was worth the trip in itself.

Now you are supporting Slash in some pretty huge venues across the UK – what excites you most about that? Have you got to meet Slash yet?
its one of those opportunities which you just don't say no to. I mean It's Slash! It's ridiculous for us to get offered this kind of tour so we're all really looking forward to getting a taste of a whole other world of touring. I think we're about to see how the big boys play.  Haven't met Slash yet, hopefully we will get to hang out with those guys a bit, we've heard they're super good people.

Finally, what does the rest of 2011 have in store for you as a band?
As much touring as possible, writing the 2nd record, hopefully being able to afford a van of our own one day and I really want to get a puppy. Thats about it.

Find out more about Japanese Voyeurs by following this link.