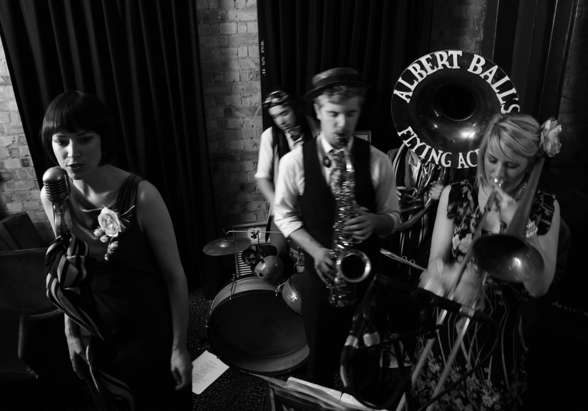 Patricia Hammond is spearheading a renaissance of popular music from 1870-1940 with “her Parlour Exhibition Band”. She plays at Passing Clouds, Dalston tonight (20th July) with Albert Ball's Flying Aces – we thought we'd catch up with her to find out what she's all about.

Hello, Patricia!  For those who might not've heard your name, please introduce yourself.
Nostalgic singer Patricia Hammond. I guess you could say a ‘classical singer’ in that the voice has been trained. But I hope that’s not too obvious! I’ve sung Bach and Handel but I’ve just been signed to do what I’ve always wanted to do, which is sing pop songs from a hundred years ago…I go as far forward as the early 1950s if I love the song.

Would you describe yourself as 'a woman on a mission'?  If so, just what is that mission?
To bring back old songs! The concept of crossover is a recent one and it’s only when classical music went into the universities and jazz became arcane that things were put in little boxes. Then pop music became a thing of the moment and rejected anything that came before. When I take my collection of old sheet music and bring out the songs of the 1910s, 20s, 30s, the really old people remember all of it. They were damned good songs and they were cherished. And younger people are amazed at how good the melodies are, how fun are the lyrics, and if I’m honest, how well the band plays! They’re stunning.

Do you still have time to listen to bands like Fugazi?  Not strictly in the same vein as what you're up to currently…
There’s always time to listen! Songs should have a strong, honest message and performances should be fresh. I’ll always enjoy performers who are honest. The best punk-based music is as intense as verismo opera. Compare singers like Magda Olivero and Eugenia Burzio with Jello Biafra and David Thomas. Similar intensity! Thank God for YouTube. Just last week I was watching live footage of  [Fugazi’s] “Shut the Door” from the early 90s and then immediately afterwards saw Al “Rubber Legs” Norman do his dance specialty act in a late 20s nightclub. Strangely they both seemed equally distant in time!

What do you think it so appealing about music from 1870-1940?
The tunes are good. They say something. I’ve collected old music since I was nine, played it all through on the piano, tried out my favourites in front of anyone who’ll listen, sung them in front of tough crowds like Nursing Homes audiences, and found out which ones come alive in performance. There are SO many songs from back then, it’s endless. So I get to pick the best out of literally thousands. These songs stay in the head, they move me.

Let me paint a picture; you're performing on stage, and by jove you're performing well.  There is a huge crowd watching you.  What're they doing?
That’s a really perceptive question! I see the room being moved by the song, like there’s a string connecting everyone to a kind of floating ball of energy that we’re creating. If it’s a fast song, they’re dancing, singing along with the refrains, laughing at the funny bits, reacting to the band’s solos…they’re a marvellous group. The percussionist is a virtuoso on the spoons. If it’s a slow and sweet song, the moment where you can hear a pin drop is pure gold. I think audiences from a hundred years ago would have the same reactions to something that’s beautiful and heartfelt.

Back to 2011.  What's the rest of the year got in store for you?
The release of “Our Lovely Day” which is 16 of my favourite songs. There are three songs with just piano and voice, two with me and a harp, and then a myriad of different arrangements by Nick Ball and Matt Redman, two guys to watch. They play sixteen instruments between them, though we’ve got many other musicians as well, obviously…fifteen of them in all. The arrangements are eclectic, and in the style of the eras the songs come from. Some may question a bouzouki solo in a tango, which happens in a song from 1931 called “Yours,” but often it’s that kind of fresh playfulness that’s lacking in a lot of authentic retro bands. We’re going to be touring the album, which will be very fun. We’re very lucky that the whole retro-speakeasy-vintage trend continues to gain momentum! We’d be doing this anyway, but it’s nice to know there’s an eager audience out there.