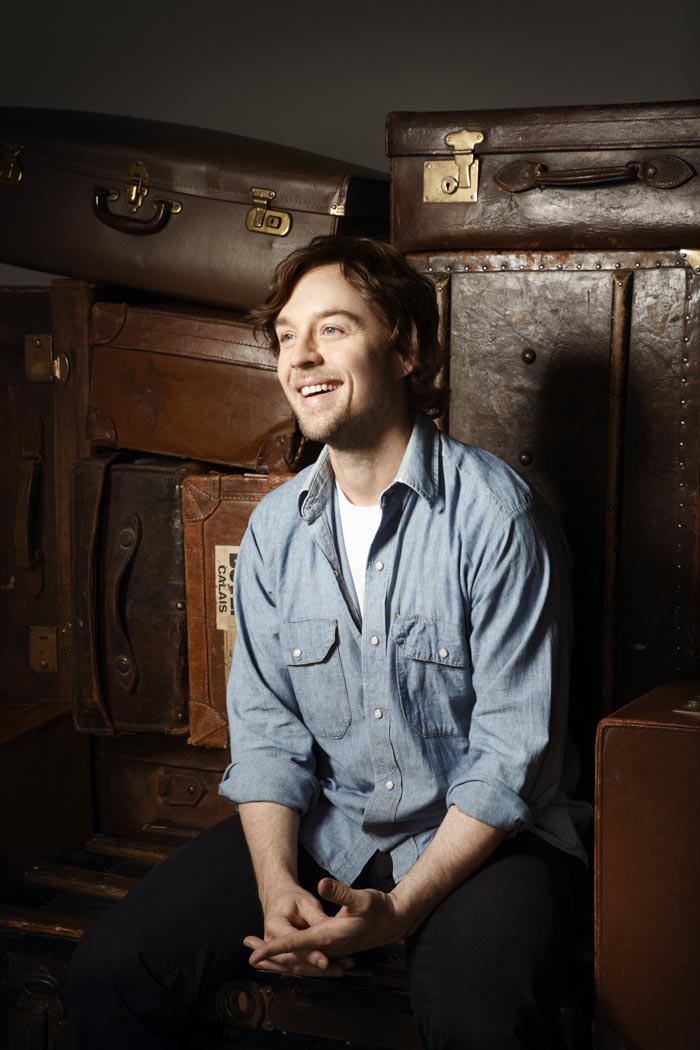 It’s been an extraordinary journey for Darren Hayes – as one half of pop duo Savage Garden and then a successful solo artist he’s been responsible for over 26 million album sales worldwide including two U.S No. 1 hits. Fast forward to today and the effervescent single ‘Talk Talk Talk’, the first single from Hayes’ forthcoming album, is exploding on UK and Australian radio.

Now I’m sure everyone is asking you this but… it’s been 4 years since your last solo record, why such a long break?

It always takes me a long time to find my new sound and feel my way into the theme of a new record. I guess my process is quite old fashioned in that I like long breaks between albums as I need the time to reinvent and live my life. I always want to be someone who writes music for people, not for the cult of celebrity and that requires having life experiences. 4 years to get some nicks and scratches is a good amount of time to have something to talk about!

We’re loving ‘Talk Talk Talk’ at Glasswerk at the moment. It’s very dance orientated in style. Is this a good indicator of what ‘Secret Codes And Battleships’ will sound like?

I don’t think of it as dance music at all – although I agree there are elements of synth and electronic styles in the production of the single. But overall I’d say the album is really an honest modern pop record. It’s more epic and less bubbly once you get past ‘Talk Talk Talk’. We chose it as the first single as it’s a gentle toe in the water of what I hope to be a dramatically warm bath!

Are you looking forward to touring the UK this October?

I adore performing on stage – especially my own tours as the music changes and evolves on stage because of the energy of an audience. I’m working again with Willie Williams (U2) my show designer since 1998 and although they are tiny venues the show will definitely have an element of theatre to it because that’s what I love.

Can we expect something spectacularly U2-ish?

This tour in particular is intentionally tiny – I wanted the music to speak first and it’s not about expensive lights and costumes. But Willie is absolutely my creative director live and this show will continue the standard my fans expect from my tours – heart, soul and an attention to detail. Our hope is that we develop a cool idea on this short run and expand it in 2012 in larger venues and in more cities.

‘Truly Madly Deeply’ has recently been named as Billboards No. 1 Adult Contemporary single of all time! It’s fair to say that Savage Garden was a phenomenon, and those songs are engrained into popular culture. Do you feel any pressure to live up to your previous success?

If I still felt pressure to beat my previous track record I’d have buckled under the weight a long time ago. I am motivated by making records I’m proud of and being a better performer. I can’t control the sales figures but I can control my evolution so I focus on being better. You’re right – the band was an incredible phenomenon and truthfully I just feel grateful I enjoyed that kind of success prior to the current state of the music industry. Savage Garden was an incredible start.

When you’re writing songs, do you have any formula you work to or a specific technique, or is it approached differently every time?

No it’s like a first date. You never know what sort of chemistry you’ll have with the song and you hope for the best and see what happens. I find songwriting a mystical almost otherworldly experience. Who knows where these melodies and words really come from but they feel very much like they find me if I pay attention. I think it’s a problem when you try to control the process. It’s that old cliché of sitting around waiting for god to walk through the room. You have to be paying attention or you’ll miss your muse.

You keep your private live private, but your songs often deal with intensely personal relationships. Is this you writing autobiographically or as an observer?

Well it’s completely autobiographical but it’s not always literal. I might be singing about a relationship ending but it’s pretty obvious it’s not my marriage. I use my life as inspiration and then I take on personas and characters and that way I can be as confessional as I want without feeling like I need to reveal all my cards. Many of the songs on my album deal with betrayal and truthfully I took inspiration from a friend who had been dishonest to me. In song I guess that might sound like I’m speaking about a lover but I was in fact talking about the end of a long friendship. I like that it’s ambiguous because that’s what I try to do with all my music – I try to write in a way that you can bring yourself or your own experience to the songs.

We notice you’re a frequent Tweeter. Do you think it’s important to be able to keep in touch with your fans this way?

I’ve always been into being real – and from the very beginning of my career I’ve liked that with blogs and chat rooms and now Facebook and Twitter I show the real me to my audience. It’s nice to be able to make a direct statement and know that you are the true source! Twitter is interesting but I try to be selective about my time on there. Because I follow a wide range of people in the arts and the entertainment business sometimes logging in can be like turning up in the town centre and listening to a million strangers vent about their frustration, anger, joy, criticism and judgement all at the same time. It’s important to strike a balance – and I just commit to spending a few moments a day checking into this busy freeway of opinions and then make sure I exit before becoming self obsessed. I do love how Facebook and Twitter reunite me with people who might have fallen out of touch with what I do today. And I love that strangers can send love your way when you’re not expecting it.

Finally a non musical question – What’s you favourite thing about living in London?

I love the commons. The thing that keeps living in a big city livable to me is the green spaces and the sense of community that living around a park has on residents. I know London is fabulous and cosmopolitan and the epicentre of art and music but it’s also a collection of tiny villages and that makes this small town boy feel at home in the big city.

The new album 'Secret Codes And Battleships' was recorded in Stockholm, Los Angeles, Sydney and Darren's home studio in London.
There are reunions with both the multi Grammy Award winning maestro Walter Afanasieff, who produced Savage Garden's Affirmation album and Darren's Spin, and Rex Goh, Savage Garden's long-term guitarist. The album was mixed by Robert Orton (Lady Gaga) and mastered by Bob Ludwig.

Hayes will be showcasing both new material and performing hits from his catalogue on tour in the UK on the following dates.