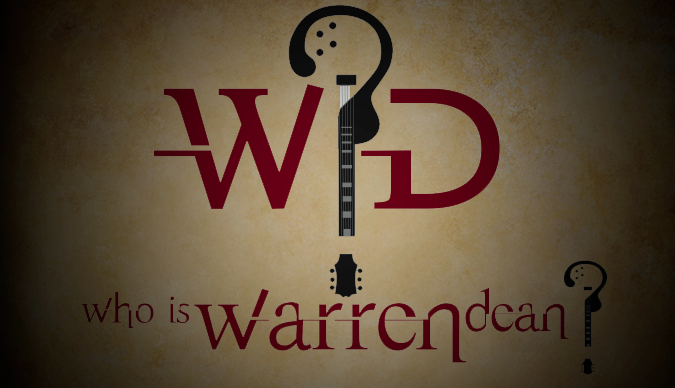 Rising talent Warren Dean released his debut album Who Is Warren Dean last month, after raising money to record it from a UK-wide busking tour, calling in on 50 towns and cities across our Isle.

An anonymous artist whose name is purely a moniker, Warren can be seen as the anti-X Factor artist; a man on a musical mission. Glasswerk caught up with him…

Q: An alien lands on earth.  He doesn't really know much about bands/artists and that – as he's an alien.  How would you describe you and your music to said alien?
Hello Mr Alien, I hope you come in peace!  Music on planet Earth has become so controlled and bland with the charts being filled by soulless acts.  The record labels sign these people as the product itself and tailor-make songs around them, writing for them, styling them etc etc.  As Warren Dean I am the complete opposite of this, you never fully see my face in photos or videos so the message of the music doesn’t get lost in all the hype and BS that surrounds modern day music acts.  With me the music is the product, rather than the image or lifestyle.

My sound is more classic rock than anything else.  The songs have riffs and guitar solos but they’re short and catchy instead of like in the 70’s where you had 7 minute long guitar solos.

Q: It's 2011, the year of the rabbit.  What's been your highlight of the year so far?  It doesn't have to be anything to do with rabbits.
Watching Watership Down on DVD!  2011 has been a very up and down year for me so far.  Had a death in the family but also recently got married.  My music is gaining some exposure too, which is great.  I got a tweet the other day from a guy in Texas saying he heard my song Turn being played on the radio there, which was a highlight.  I guess in front of my wife I’d have to say the highlight of this year was getting married, but just between you and I, it was probably releasing my debut album, which the general public paid for in a weird X-Factor kind of way.  I went busking around the UK and used the generous donations from 50 towns and cities to fund the album.  Instead of picking up the phone, giving Simon Cowell 50p and voting for the next person he’ll drop in 6 months, I had a guitar case full of coins from the general public which I used to record and digitally distribute the album and set up my label, WhiteHeat music.

Q: God calls you up, and he's wanting to put on a show.  Being God and all – he doesn't really have time to choose bands, DJs or a venue.  He's put you in full control.  Also – again, him being God and all – you can choose anyone alive or dead – he's that good.  Who's playing and where?
Drums – Keith Moon (The Who)
Bass – Flea (RHCP)
Rhythm Guitar – Warren Dean (me!)
Lead Guitar – Dimebag Darrell (Pantera)
Vox – Kurt Cobain (Nirvana)

Jimmy Page turned up at the auditions but I out-riffed him!  I’m sorry but I’d HAVE to jam with these guys, what a line up!

Q: What bands/artists are there around at the moment that people aren't listening to enough?  Any tips for future stardom?
WARREN DEAN!  Ha!  I go to gigs all the time and there are so many good bands in London at the moment but labels aren’t interested in them because the industry has changed so much.  There’s no more artist development with labels anymore as they’re only in it for a quick buck rather than an acts longevity and it’s killing the industry.  Music has always been a business but lately that fact has become more and more obvious and it shouldn’t be that way.  I am proof that you can do it on your own, set up your own label, self-release your songs so you don’t need a major labels input at all.  My advice to unsigned bands looking for a deal is to stop looking and do it on your own terms, that way you get to keep 100% of the rights to your own music too.  As for stardom, I have no idea.  I’m not interested whatsoever in being famous, that’s why I remain anonymous; Warren Dean isn’t even my real name.  I want people to like and enjoy my music, not read trashy magazines about where I went on holiday.  There are way too many “celebrities” in this world with zero talent, usually on reality TV shows.

Q: What's the rest of 2011 – it's the year of the rabbit, don't you know – got in store for you?
I’m still doing some promo work for my debut album, “Who is Warren Dean?” getting reviews and interviews (by aliens) published.  I’m launching the digital release in Japan in the next few weeks, then I’m going to start writing again which has always been my favourite part of being a musician.  Some friends of mine are trying to coerce me in to recording an anti X-Factor song to rival their usual Xmas number 1 in the UK.  It’s a great idea as I’m the complete opposite of that show…you’ll just have to wait and see if anything comes into fruition.

Q: That alien from Q1 is back – he's just got his mitts on a computer, and he wants to find out more about you.  Where's the best place he can go to find out more?
You can stream my whole album and watch my videos here (Reverbnation) – link.

For more info on who I am, where I came from and what I’m trying to achieve or to buy the album (its cheaper and you get an exclusive track not available anywhere else) check out this link.