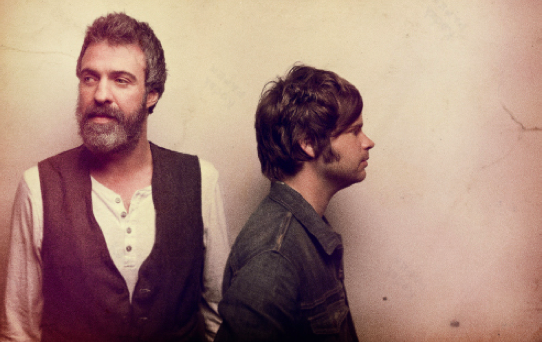 Sunderland's Hyde & Beast release their debut album Slow Down next week on August 15th, and celebrate with a show at The Social in London on August 17th.

Q: An alien lands on earth.  He doesn't really know much about bands/artists and that – as he's an alien.  How would you describe you and your music to said alien?

Hyde: That depends. What type of stuff does he normally listen to? Hawkwind? I would politely ask him to get his sporty time machine out and advise him to go back to the ’60s and ’70s and spend a bit of time taking mind bending drugs and listening to everything!

Beast: I think a fight or flight impulse would take me over and I’d probably just attack the little fella. I don’t trust what I don’t understand. Beast vs Alien. It will be made into a feature film! If he survived my brutal onslaught I would deem him worthy of an explanation of our music, but if he is from space I reckon he will understand it without an explanation. They are probably playing music like ours up there anyway.

Q: It's 2011, the year of the rabbit.  What's been your highlight of the year so far?  It doesn't have to be anything to do with rabbits.

Hyde: When I first found out that some crazy bastard was mad enough to play one of songs on national radio! Ha ha. That was a good moment.

Beast: My highlight so far has been Hyde managing to pour 2 full pints of cold lager all over himself during an interview in London the other week. I've also enjoyed making our videos and making some fresh guacamole at a recent party.

Q: God calls you up, and he's wanting to put on a show.  Being God and all – he doesn't really have time to choose bands, DJs or a venue.  He's put you in full control.  Also – again, him being God and all – you can choose anyone alive or dead – he's that good.  Who's playing and where?

Hyde: It would be at the roundhouse in London, lovely venue, I would have Animal Collective, Bill Withers (’70s version with tight-as-fuck band. Hopefully he would wear a tangerine coloured roll neck sweater), Flaming Lips, Super Furry Animals, Incredible String Band, Velvet Underground.

Beast: Nonsense. Speak for yourself. Mine would be in my back garden and feature only Barry White. Resplendent in a white suit, sweating profusely and mopping his brow with a purple silk handkerchief. He would start the set with “Let the music play”. What a night!  What a night.

Q: What bands/artists are there around at the moment that people aren't listening to enough?  Any tips for future stardom?

Beast: The Stepkids. They’re a trio from Connecticut in America and are playing this kinda mildly trippy ’70s type soul music. Sly type stuff. I also really like what I’ve heard of Colourmusic. They are released on Memphis Industries label over here and I am digging them a lot.

Hyde: We have a tour currently being lined up for this Autumn. We are also playing at Sunderland’s very own Split Festival alongside bands like The Drums and Ganglians.

Beast: Our albums out on August 15th and we have a couple of launch shows one for the Southerners and one for the Northerners. We play at The Social in London on August 17th and the Cluny 2 in Newcastle on August 19th. I'm gonna spend the rest of the year trying to unearth some nice doo-wop tunes.

Beast: He can go to hell! I've already attacked him and he is back asking more questions? What’s wrong with this guy? Well I do admire his persistence, so in that case I would point him towards hydeandbeast.co.uk (link) or facebook.com/hydeandbeast (link) – and if he likes a little twitter I would tell him to follow us on there so I can taunt him from the other side of the universe.