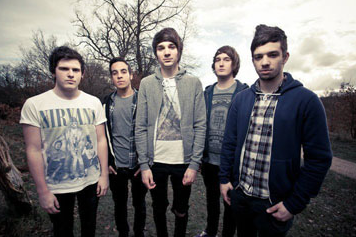 Bath five-piece Decade are gearing up to release their debut single “The Doctor Called (Turns Out I'm Sick As Fuck)” on August 15th through Slam Dunk Records.

Q: An alien lands on earth.  He doesn't really know much about bands/artists and that – as he's an alien.  How would you describe you and your music to said alien?
I think We describe ourselves as pop-punk meets hardcore these days, we've got strong vocal melodies and catchy choruses but we're not afraid to get heavy where it needs to be. We started off with the generic pop punk sound but we're gradually getting further away from it and building a much more original sound.

Q: It's 2011, the year of the rabbit.  What's been your highlight of the year so far?  It doesn't have to be anything to do with rabbits.
Aw man this year's been insane for Decade, but the highlight might have to be the tour we did with Set Your Goals, A Loss for Words and This Time Next Year! Not only did we get to play with these awesome bands but the tour consisted of Hub Festival, a great run of dates and both Slam Dunk North and South! All of this was an awesome experience for us and the responses we got from Hub and both Slam Dunks was really awesome!

Q: God calls you up, and he's wanting to put on a show.  Being God and all – he doesn't really have time to choose bands, DJs or a venue.  He's put you in full control.  Also – again, him being God and all – you can choose anyone alive or dead – he's that good.  Who's playing and where?
Well as far as a venue goes, he should either sort out an arena made of cloud or bring Atlantis up for the day! I think I'd personally have N.W.A. and Nirvana as bands that no longer exist because they've always been bands I've loved and I would have loved to witness them live back when they were making music. Aside them I'd chuck Dr. Dre, Eminem, Yellowcard, Good Charlotte and Slipknot on the line up. There's tons I could add but these are just some of the artists I spend a lot of my time listening to and would love to see live, I'm sure God wouldn't mind!

Q: What bands/artists are there around at the moment that people aren't listening to enough?  Any tips for future stardom?
I think Letlive is definitely one that's overlooked at the moment, although I'm sure once they drop their second album people will be addicted to them! Don Broco are the other one to watch for me, those guys have such an insane live performance and I can't wait to hear some more stuff from them!

I think bands really succeed when they don't let the genre they're in dictate where they can go for direction! I really love a band when they take the generic sound of a genre and pour something different into it to create almost a sub-genre that belongs to them and them alone.

Q: What's the rest of 2011 – it's the year of the rabbit, don't you know – got in store for you?
We've got our debut single 'The Doctor Called, Turns Out I'm Sick as Fuck' out on the 15th August through Slam Dunk Records, you can get a free copy from the Slam Dunk website! We're also on tour with Forever the Sickest Kids, Glamour of the Kill and Action Item in October, from the 5th-13th!

Q: That alien from Q1 is back – he's just got his mitts on a computer, and he wants to find out more about you.  Where's the best place he can go to find out more?
We give all our updates through facebook.com/decadeofficial (link) ! If you head over there, you can see our October tour dates and pick up a free copy of our EP 'Lost at Sea'! Also follow us on Twitter @decadeofficial!