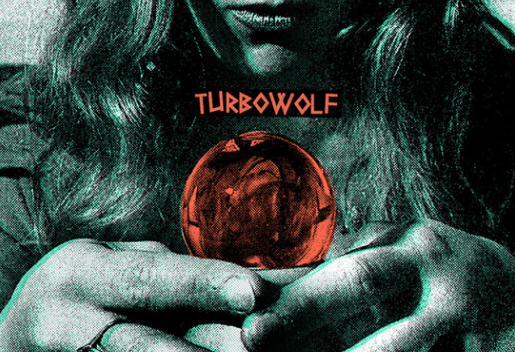 Bristol rockers Turbowolf recently signed to Hassle Records, and are gearing up to release their debut album this year. Glasswerk only went and caught up with them, didn't they?

Q: An alien lands on earth.  He doesn't really know much about bands/artists and that – as he's an alien. How would you describe you and your music to said alien?
Aliens have been playing a crucial role in our cultural development for thousands of years, including to a certain degree our band. So they'll probably be able to describe our music better than we can. I hope an alien might produce our next record.

Q: It's 2011, the year of the rabbit.  What's been your highlight of the year so far?  It doesn't have to be anything to do with rabbits.
There's been a couple of highlights at least so far this year. Signing to Hassle Records, playing to a capacity crowd at Sonisphere, shooting some videos, shooting some rabbits…

Q: God calls you up, and he's wanting to put on a show.  Being God and all – he doesn't really have time to choose bands, DJs or a venue.  He's put you in full control.  Also – again, him being God and all – you can choose anyone alive or dead – he's that good.  Who's playing and where?
Unfortunately we're not available to play as Satan has booked us on the same date… typical. Here goes: Jimi Hendrix, Mozart, The Mars Volta, Pink Floyd (Dark Side era), King Crimson, Death From Above 1979, Nirvana, Black Sabbath, Refused, Monotonix and ELO.

Q: What bands/artists are there around at the moment that people aren't listening to enough?  Any tips for future stardom?
Well fortunately a lot of our friends bands are already doing pretty well (Dinosaur Pile-Up, The Computers, Pulled Apart By Horses etc.) and unfortunately some of our friends bands have just split up (Monotonix, Ghost Of A Thousand). Here's a couple that might not have got the attention they deserve yet: The Big Naturals, Castrovalva, Eager Teeth.

Q: What's the rest of 2011 – it's the year of the rabbit, don't you know – got in store for you?
We release our debut album through Hassle Records on 11.11.11, we're going on tour with our pals Hawk Eyes and The James Cleaver Quintet in November too which will be RAD. Releasing another single, with another video from director/magician Stephen Agnew. Fun rabbit stuff.

Q: That alien from Q1 is back – he's just got his mitts on a computer, and he wants to find out more about you.  Where's the best place he can go to find out more?
We saw he added us on Facebook the other day, but for anyone else who wants to get in contact or see what's going on in the Turbowolf world, go here: link. Also, if he wants to get his weird little hands on some Turbowolf merchandise, go here: link. Alien size shirts almost sold out.