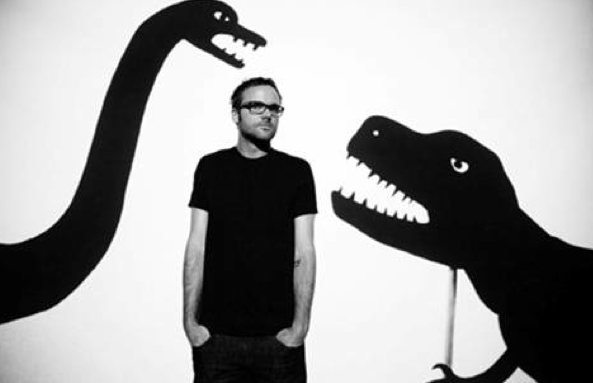 It's a busy time for Brooklyn-born Cassettes Won't Listen, having this week released the video for new single “Echoes”, and releasing his new album EVINSPACEY next week.

Originally entitled KEVINSPACEY, a court order from – you guessed it – Kevin Spacey put that plan to bed. Glasswerk caught up with Cassettes Won't Listen – aka Jason Drake – below…

Q: An alien lands on earth.  He doesn't really know much about bands/artists and that – as he's an alien.  How would you describe you and your music to said alien?
After the initial shock of meeting an alien and accepting the fact that he'd like to know about what I do, I'd probably start off by trying to break down a bit of geography and describe to him that I've recently moved to Los Angeles from Brooklyn, NY to record my latest album.  I'd have to describe to him that an album is a collection of songs that we put on plastic disc called CDs, vinyl-based discs called records,  or even sell as digital files that have no physical content. Songs would be described as a ways to communicate through fluctuation in frequencies, rhythm, and timbre. From there I'd let him know that my method of communication is through various boxes containing electronics that communicate with themselves to output certain sounds.  Those boxes are called drum machines, synthesizers, and computers.  I personally use boxes such as MPC1000, MacBook containing Ableton and Logic, and box “controllers” like the MPK49, Monome, amongst others.  I put those sounds together and add my voice to create a song.  Needless to say, it would be a long conversation. He'd probably be very confused.

Q: It's 2011, the year of the rabbit.  What's been your highlight of the year so far?  It doesn't have to be anything to do with rabbits.
The obvious answer would be putting out my latest record, and that has definitely been a huge highlight, but I've just returned from a trip to Malaysia and the island of Borneo for 10 days which was an amazing experience.  I did a lot of trekking through the rain forest, climbed Mt. Kinabalu, and relaxed on the beaches off the coast of Kota Kinabalu.  I was also able to record some music for my instrumental side project, Dfalt, so it was a nice mix of productivity and relaxation.

Q: God calls you up, and he's wanting to put on a show.  Being God and all – he doesn't really have time to choose bands, DJs or a venue.  He's put you in full control.  Also – again, him being God and all – you can choose anyone alive or dead – he's that good.  Who's playing and where?
Space would be awesome so I'd probably have God hook up an extension to the international space station and set it up as a huge venue.  We'd shuttle people through Virgin Galactic to the venue, it would probably have to be a festival given the time it would take to get everyone there.  I'd invite mostly dead people to perform to make the festival stand out.  So Beethoven would greet people on the piano as they arrived, we'd have a rock room that had The Beatles, The Doors, Joy Division, Sex Pistols, Nirvana, and Jimi Hendrix. A hip hop room featuring Ol Dirty Bastard, Notorious BIG, Tupac, and Easy-E, and a various room featuring Bob Marley, Ray Charles, Luciano Pavarotti, and myself.  Then I'd ask God to perform just to hear what it would sound like.

Q: What bands/artists are there around at the moment that people aren't listening to enough?  Any tips for future stardom?
I may be biased but all the artists on the Daylight Curfew artist collective are bands/artists that aren't being listened to enough.  I started the collective with Brooklyn MC Bisco Smith about a year ago and it features indie musicians and visual artists from Los Angeles and Brooklyn.  The music ranges from electronic to hip hop to experimental indie rock.  Artists such as Echoes Alike, Bisco Smith, Turnbull Green, The Freeze Tag, Grimace, and Eka are bands/producers that I'm listening to constantly nowadays. My tips for future stardom would be to not think about future stardom, just make music.

Q: What's the rest of 2011 – it's the year of the rabbit, don't you know – got in store for you?
I'm gearing up for another single release from the album for the track “Runtime”.  I just finished shooting the video and that should be coming out within the next month or so.  I'm also working on my side project, Dfalt, which is a project I started about a year ago.  It'll be an instrumental record and sort of acts as a palette cleanser from the CWL material.  Other than that I'm performing a few upcoming shows here in LA and will be planning a tour around this record for the Fall/Winter.