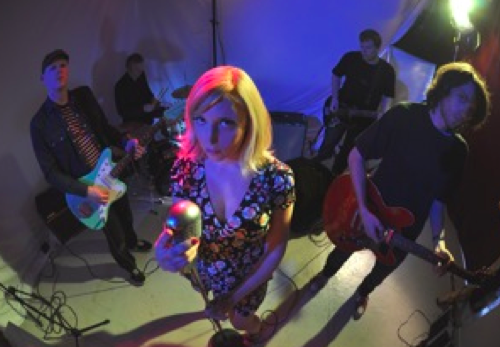 Deep Cut recently released a video for their single “Something's Got To Give” – check it out above – that's taken from their new album Disorientation, that's out September 5th on Club AC30 Records.

Their 2009 debut full-length My Thoughts Light Fires never really sparked in the UK, however the disappointment felt by the band was tempered with the album's success abroad, most notably Japan. We thought we'd catch up with Deep Cut…

Q: An alien lands on earth.  He doesn't really know much about bands/artists and that – as he's an alien.  How would you describe you and your music to said alien?
21st century psychedelic pop music. Trippy but melodic, hopefully a slightly twisted take on conventional alternative guitar music.

Q: It's 2011, the year of the rabbit.  What's been your highlight of the year so far?  It doesn't have to be anything to do with rabbits.
As a band, the highlights have been completing our album, which we're very proud of, and playing at Glastonbury was a real high too. Personally, the birth of mine and Emma's second daughter, Lara, in January.

Q: God calls you up, and he's wanting to put on a show.  Being God and all – he doesn't really have time to choose bands, DJs or a venue.  He's put you in full control.  Also – again, him being God and all – you can choose anyone alive or dead – he's that good.  Who's playing and where?
Ok. I love ATP – so it could be ATP curated by Deep Cut. We would have the Byrds, the Flying Burrito Brothers, the Who, the Chocolate Watch Band, the Clash, the Beatles and the Sex Pistols in the main room. On the second stage it would be My Bloody Valentine, Primal Scream, the Jesus and Mary Chain, Sonic Youth and Dinosaur Jr. We would have Neu, Kraftwerk, Can and Harmonia playing in a third room, with Andrew Weatherall and Slam DJ-ing. Then on the hip hop stage we'd have A Tribe Called Quest, Nas, Brand Nubian, Wu Tang Clan, Pete Rock and CL Smooth and Gang Starr. With me DJ-ing.

Q: What bands/artists are there around at the moment that people aren't listening to enough?  Any tips for future stardom?
Our friends the Real Sound are amazing. They've got some phenomenal songs that will blow you away. I don't really like many new bands… Maybe I just haven't heard them.

Q: What's the rest of 2011 – it's the year of the rabbit, don't you know – got in store for you?
Some more shows, me and Si are doing some remixes for people, maybe helping the Real Sound do a mix of one of their songs, and writing some new stuff. I also might finish the last Revolver record, which was written back in 1993. If I get time!

Q: That alien from Q1 is back – he's just got his mitts on a computer, and he wants to find out more about you.  Where's the best place he can go to find out more?
Facebook – link
Soundcloud – link
Myspace – link