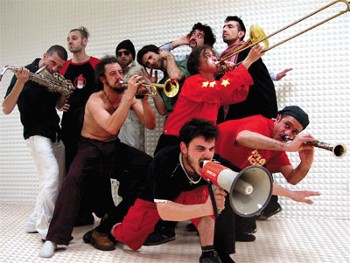 Having toured from Australia to Abu Dhabi, the 10 piece ska group Babylon Circus have played over 1000 shows in Europe. Hailing originally from Lyon, Babylon circus fuse together ska, gypsy swing and French cabaret to create high-energy shows that transport you around the globe. Taking a break from recording their new album in Paris, we hook up with Babylon Circus at Boomtown for a quick chat.

Do you have any new projects on the go?

Err, yes we are recording a new album in Paris. In the 18th arrondisment, near Montmatre, you know? We never make an album as if we have arrived, we must evolve, it has be our style, but moving [forward]. We’ve been working till 2am. In every album, someone new grows, a new character. You learn more from the last, and talk about the story you are telling. Look at books and films that tell a story, and traditional story-telling, start from there and you can’t go wrong.

So do you have a favourite story? Tell us a traditional French folk tale.

You know Romeo and Juliet? [Twinkle in the eye] Hmmm, never heard of them..

You’ve talked about stories and storytelling being an influence on your music. Do you have any key musical influences for this album or people you are listening to at the moment? The last album I bought was Asian Dub Foundation. We like Gogol Bordello. We love jazz, reggae.. But each member has their own style. Touring, you meet new bands. Music is an eternal discovery. Also the internet’s great; but looking as stuff together, with a couple of friends, talking about music.

So your music has influences from all around the world, and you’ve travelled a lot. Where did you most enjoy playing and where influenced you most? Syria was like a slap, it was so different you know. And Russia. South Korea was really bizarre and unique, but it was an amazing show.

Is this your first time at Boomtown? What do you think? This is our second time at Boomtown. Crazy people! It’s cool to see families, wackily dresses. English people are really free. Last time, we got off the bus and were just WOW..

When I lived in Paris, everyone was really well dressed, but it was always a uniform of greys, navy blue, black.. It was classic, but all the same and very different to the UK, you know? I have this image of Britain, I remember this picture that sticks with me. It’s in London, and a punk with a big, red you know [crazy hand gestures over head – Mohican?] reading a newspaper, sitting next to an old lady, who is not scared or shocked at all. On the metro in Paris, everyone just stares at their feet.

Do you find it easier to express yourself in French or English when playing different styles of music? We’ve always sung in both. In the beginning, more English, as French is harder and not as simple. In the way that in French, you must always tell a narrative and there is so much tradition. Understanding the lyrics and their poetry in French is very important and they have powerful meanings.