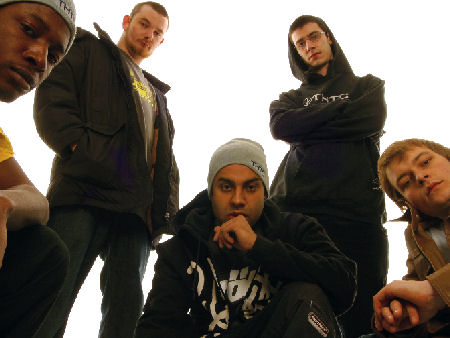 Averaging over 100 shows per year, the acclaimed rap, grime and dupstep group Foreign Beggars are one of the most prolific groups of their generation. Settling down with two quarters of Foreign Beggars and with only three minutes on the clock, we did our best to find out what this London group is up to this summer.

Do you have any new projects in the pipelines?

We got an extended EP album project with Noisia, which is coming out February/March next year. We’ve been doing some tracks with Flux Pavilion, Skism, Starkey for some more grime pieces and we finished recording a track with Sophie. As well as lots of new remixes.

It would have to be Busta Rhymes I dunno, I’d love to shut him up [cheeky grin].

What are you up to this summer?

So are you getting a bit homesick?

[Orifice Vulgatron]I haven’t really had a home for the few months. I’ve been living on floors, cos I wasn’t allowed to come back to the UK.

[OF]I have an Indian passport and no tourist visa so they banned me. I’ve been living out of a backpack. It’s been 14 months so I’m back. So we cleaned up in Europe. Then Australia, New Zealand..

So where was your favourite place?

Everywhere; but right now Belgium, best place to be. We went to Dour, love that festival.