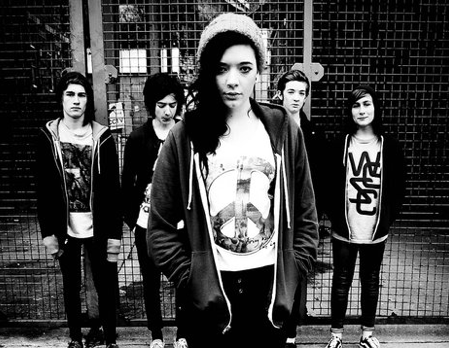 West Yorkshire's Marmozets are a band on the brink. With a 2011 to remember and just back after a wow-inducing performance at Hevy Festival, we caught up with them to find out more.

Q: An alien lands on earth.  He doesn't really know much about bands/artists and that – as he's an alien.  How would you describe you and your music to said alien?
Its like music from another planet.

Q: It's 2011, the year of the rabbit.  What's been your highlight of the year so far?  It doesn't have to be anything to do with rabbits.
Definitely playing Hevy Festival. We met some great people and saw some awesome bands for free – what could be better?

Q: God calls you up, and he's wanting to put on a show.  Being God and all – he doesn't really have time to choose bands, DJs or a venue.  He's put you in full control.  Also – again, him being God and all – you can choose anyone alive or dead – he's that good.  Who's playing and where?
I think Blakfish would need to headline supported by Dillinger, The Fall of Troy, The Mars Volta and a warm up set from Dr. Dre – now that would be a fricking awesome show. We'd have it at the 1in12 Club in Bradford. BOOOM.

Q: What bands/artists are there around at the moment that people aren't listening to enough?  Any tips for future stardom?
There are loads of great bands from the Bradford/Leeds area where we come from. We think our good friends the Coopers are one's to watch – they recently won a competition to play at this year's Leeds and Reading festival. We also have a slight obsession at the moment with Feed the Rhino.

Q: What's the rest of 2011 – it's the year of the rabbit, don't you know – got in store for you?
Its going to be busy. We should be releasing our Passive Aggressive EP soon and we will be promoting that all over the shop in the next few weeks. We are also recording another EP in Sep/Oct and we think that will get released early next year. We've also got some exciting shows lined up as well so there we've got lots on the go.

Q: That alien from Q1 is back – he's just got his mitts on a computer, and he wants to find out more about you.  Where's the best place he can go to find out more?
Our website at marmozets.co.uk (link)  which also has links to our facebook, twitter and tumblr. Also our Passive Aggressive EP is streaming on myspace so you can check it out there. Thanks for listening folks!