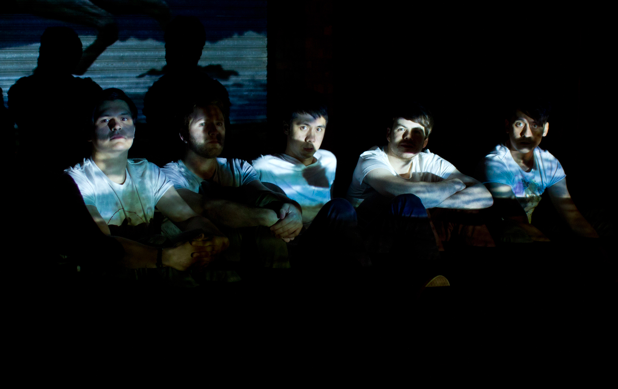 The five-piece are hard at work on a new EP, tentatively set for a February 2012 release – in the mean time, abide yourself with “The Lesser” – available via the Soundcloud above. Glasswerk caught up with Decibels to find out more.

Q: An alien lands on earth.  He doesn't really know much about bands/artists and that – as he's an alien.  How would you describe you and your music to said alien?
Imagine you've got your alien laptop, you spill your alien tea on it, falls off your lap, down some stairs and lands on a bin lid. By chance you've recorded the whole thing. Or..like ear sex……

Q: It's 2011, the year of the rabbit.  What's been your highlight of the year so far?  It doesn't have to be anything to do with rabbits.
Adam joining the band and completing the winning formation – and of course, getting a band yacht.

Q: God calls you up, and he's wanting to put on a show.  Being God and all – he doesn't really have time to choose bands, DJs or a venue.  He's put you in full control.  Also – again, him being God and all – you can choose anyone alive or dead. Who's playing?
David Bowie, Sigur Ros, Mars Volta, Justice, Michael Jackson, Massive Attack, !!!, Flaming Lips, Prince, Daft Punk, Boards of Canada, Bjork, Flying Lotus, Broken Social Scene, French Horn Rebellion, Death Cab for Cutie, At The Drive In, Dj Shadow, Radiohead, Aphex Twin.

Q: What bands/artists are there around at the moment that people aren't listening to enough?  Any tips for future stardom?
Safari, Plugs, Inc, Breton but if you want a sure fire ear pleaser go to link

Q: What's the rest of 2011 – it's the year of the rabbit, don't you know – got in store for you?
Gigging, writing, recording and promotion for our debut EP. lots of sex….?

Q: That alien from Q1 is back – he's just got his mitts on a computer, and he wants to find out more about you.  Where's the best place he can go to find out more?
Facebook – link
Official – link
Soundcloud – link

The Lesser by Decibels