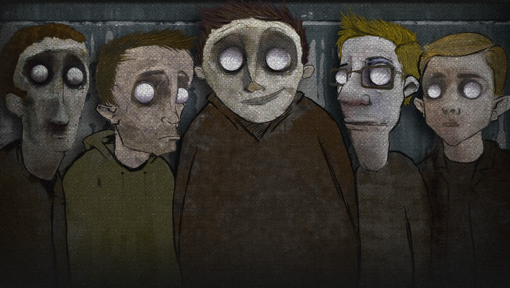 Fronted by songwriter/guitarist Myles McCabe, the band have been said to house elements of Brian Wilson and My Bloody Valentine.

With a set of recordings completed at guitarist Sam Robson's house, they are set to perform them live at their residency at The Bowery, London on September 6th, 12th, 20th and 27th. Glasswerk had a little chat with them to find out more.

Q: An alien lands on earth. He doesn't really know much about bands/artists and that – as he's an alien. How would you describe you and your music to said alien?
They're just songs really, we try and do what feels right with them. Mostly right seems to feel like loud guitars and 5 part vocals, piano and bass; sometimes other noises.

It's 2011, the year of the rabbit. What's been your highlight of the year so far? It doesn't have to be anything to do with rabbits.
Well we totally stopped gigging at the start of the year. We kind of shut ourselves away and went into intensive writing and rehearsing mode. It felt good coming out of that and getting back to playing live. Seeing the animated video for “Build a Life” was cool as well.

Q: What bands/artists are there around at the moment that people aren't listening to enough? Any tips for future stardom?
We've been lucky enough to play with some really killer acts over the last few weeks, Palace of Justice and Ex-Libras are both definitely worth a listen. We're playing with Killington Fall and Dead Red Sun at the Bowery, can't wait for that; both bands always smash it live, they're insane.

I've been listening to Girls a lot, can't get over their track “Vomit”. I'm in love with The Antlers at the moment as well, also I think we're about due for another “Why?” album.

Q: What's the rest of 2011 – it's the year of the rabbit, don't you know – got in store for you?
We haven't planned much past our single launch at the end of September. We might go back into hiding, I don't know. Definitely more writing.

Q: That alien from Q1 is back – he's just got his mitts on a computer, and he wants to find out more about you. Where's the best place he can go to find out more?
If you go on stspirit.com (link), you can watch the “Build a Life” video, also find links to our Myspace and Facebook. We're on souncloud too: link.  “Build a Life” is up there along with a couple of SamT St. Spirit remixes.