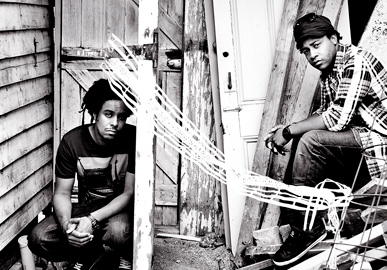 Australian duo Diafrix are gearing up to release their new single “Simple Man” featuring Daniel Merriweather in the UK on September 26th.

After time to reflect on what was a crazy summer for the pair – a summer that included a stand-out performance at Glastonbury – glasswerk.co.uk caught up with them to find out their thoughts.

An alien lands on earth.  He doesn't really know much about bands/artists and that – as he's an alien.  How would you describe you and your music to said alien?
The music is from a neighbouring planet. I can’t believe you haven’t heard our music! And people think aliens are more advanced than us. Haven’t you heard of YouTube? It’s Hip Hop mixed with a touch of funk, dancehall, electro and soul.  Music that makes you feel good. You’re looking kind of blue; here let me give you a free copy.

It's 2011, the year of the rabbit.  What's been your highlight of the year so far?
It doesn't have to be anything to do with rabbits.
Glastonbury fest was a life-changing event. I’ve never seen that many people attend an event.  It always feels like a great achievement when you go half way across the world to showcase your music and people bounce around with you.

God calls you up, and he's wanting to put on a show.  Being God and all – he doesn't really have time to choose bands, DJs or a venue.  He's put you in full control.  Also – again, him being God and all – you can choose anyone alive or dead – he's that good.  Who's playing and where?
It would have to be a free gig, free for the public and the artists performing would have to pay a bit of money which would go towards a charity of some kind. All I know is that the main act would be Bob Marley and I’d make 2pac and Biggie perform a song about who shot them. I’d have Cat Stevens and Cee-Lo Green do a song together. Damian Marley, Jimmy Hendrix and Drake would be on the bill. And a surprise set by Diafrix, Lauryn Hill and the Gorillaz . The opening act would be the Jackson 5 and a feature from the Muppets.

What bands/artists are there around at the moment that people aren't listening to enough?  Any tips for future stardom?
I’m really digging this Rwandan born, Helsinki based rapper ‘Gracias’ and all of the Odd Future dubs. Also love what Wretch 32 is doing and would love to do a track with him. Holla if you see him!

What's the rest of 2011 – it's the year of the rabbit, don't you know – got in store for you?
All of our focus is on this LP PFOD “ Pocket Full of Dreams” at the moment and also trying to get our asses back to Europe!

That alien from Q1 is back – he's just got his mitts on a computer, and he wants to find out more about you.  Where's the best place he can go to find out more?
Facebook – link
Twitter – link
He can also grab our LP or EP from iTunes.